Opening of the new ICorr Building on 6th June 2019 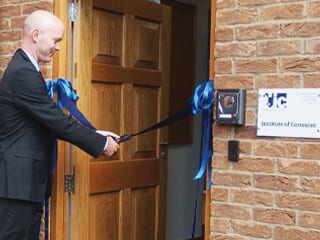 It has been a long time since ICorr has had a permanent home of its own. After a long search for suitable premises in Northampton and 2 near misses, a suitable property was finally located by Trevor Osborne, who then supervised the purchase of 5 St Peter’s Gardens.
The new premises have been redesigned and fitted out to a high standard, to include modern office space for the office manager and staff, a conference room and a training floor with a flexible teaching layout, kitchen and breakout areas.
All the work involved in this process, from liaising with the local council, hiring an Architect and Contractors and overseeing the conversion work, has been personally handled by Trevor, without charging the Institute – a rare act of generosity in the modern world.
The office staff, Denise Aldous (Office Manager) ably assisted by Gwynneth and Sue, moved the office files, library and many ancillary items into the building and settled in the ground floor.
An ICATS training course has been successfully run in the new first floor training room and the presenter and attendees were impressed by the high standard of the facilities. The Trustees and the Council of the Institute have also held their first meeting in the bright meeting room on the second floor, and again were very pleased with the new facilities.
The official opening of the building took place on 6th June 2019 on a bright summer’s day, when the current President, Gareth Hinds, cut the ribbon with many ICorr members, Past Presidents and friends of the Institute in attendance. 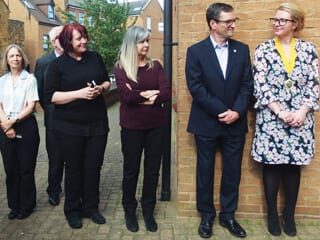 Gywnneth, Sue and Denise with David Mobbs and Immediate Past President, Sarah Vasey.

Everyone then moved up to the meeting room, and Bill Cox explained that this was the second building that ICorr had owned. The first was organised by David Deacon, and the Trustees of ICorr thought it was fitting that the meeting room be named the Deacon room in recognition. Bill presented the name plate for the room to members of David Deacon’s family, who were present to accept the accolade.
The entire group then moved down to the first floor training room, where Sarah Vasey, the Immediate Past President, spoke about the long search to find the current home for ICorr and the enormous efforts made by Trevor Osborne to make it the reality we were all experiencing. In recognition of his selfless work, the Trustees had agreed that the training room would be named the Osborne room. Sarah then presented the name plate to a surprised and delighted Trevor.
The final ceremony of the day was the signing of a new agreement for training, between ICorr and IMechE. Chris Kirby was present for IMechE and Sarah and Gareth for ICorr.
Following the formal part of the proceedings, the guests continued to enjoy an excellent buffet, whilst Gareth gave a presentation on the bright future of the Institute, followed by time for people to meet up with old friends and enjoy the event. 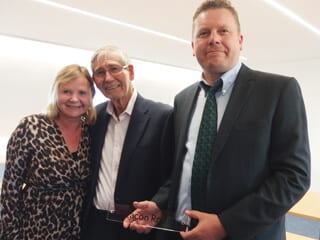 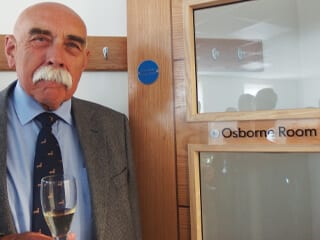 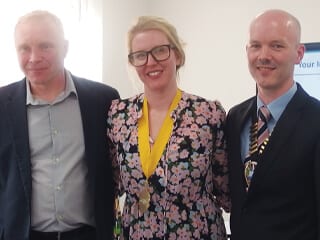 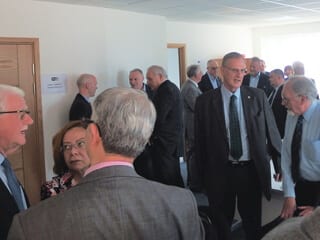 At a time of perhaps greater than usual uncertainty about the future in the UK, the opening of the new building was a special occasion to recognise both the past and the new phase in the life of the Institute of Corrosion.
Jane Lomas