Institute of Corrosion Awards: 2020 Winners and 2021 Call for Nominations 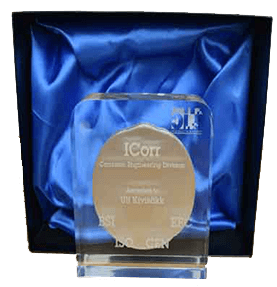 It’s that time of year again – corrosion awards season is approaching, and the Institute of Corrosion is calling for nominations. This is your chance to tell us who you consider would be a worthy recipient of one of the Institute’s awards that recognise outstanding achievement, extreme excellence, and superior service to the Institute and wider corrosion community.

Many of these awards are open to nomination by members and non-members. Take a look at the description of each award below. If you know someone who you think deserves one of the awards, then please let us know. We include how to nominate in each description.

Christos’s presentation was titled ‘An investigation of the effect of chloride ion concentration on the localised corrosion of the E717 magnesium alloy’. His talk discussed using the in-situ scanning vibrating electrode technique (SVET), coupled with time-lapse imaging, to study magnesium corrosion behaviour.

To be considered to present, please submit a 200-word abstract that details a 10-minute talk you would like to give at this year’s symposium. We’ll let you know if yours has been selected for presentation ahead of the symposium in September 2021.

For the opportunity to be awarded the highly sought-after certificate and cash prize, send your abstract to j.a.wharton@soton.ac.uk.

The Galloway Award is presented to the student author that the judging committee decides is the best published paper that describes original research in corrosion science and engineering during the past 12 months.

The winner receives a cash prize (this year, £300) and a certificate, and a summary of the work is published in the Corrosion Management magazine. The Institute of Corrosion does not retain copyright of the material, allowing the winner to publish elsewhere.

Arpit’s paper, ‘Predicting the corrosion rate of steel in cathodically protected concrete using potential shift’ was published in the Construction and Building Materials Journal. This work examined the possibility of predicting the corrosion rates using polarisation data and the Butler-Volmer equation to develop cathodic protection criterion for reinforced concrete exposed to the atmosphere.

Submissions for this year’s Galloway Award should be in the form of a paper published in the last 12 months (or a draft publication) and sent to the CSD Chair Julian Wharton by email.

This award is reserved for those authors who have papers published in Corrosion Science during the previous calendar year. A sub-committee of the Corrosion Science Division selects the winning paper, with the recipients announced by the end of the year. The winning authors receive a certificate and a cash sum of £400.

2020 Winner: Rigel Hanbury and Gary Was (University of Michigan)

Rigel and Gary jointly authored the paper titled ‘Oxide growth and dissolution on 316L stainless steel during irradiation in high temperature water’, which describes a novel approach to study 316L oxide growth and dissolution under simultaneous proton radiation and corrosion in 320 °C hydrogenated water, using a helium bubble. Helium implantation was chosen because it is chemically inert and, compared to heavier noble gases, it generates fewer radiation defects and has a greater implantation range.

This is the premier award of the Institute of Corrosion in the field of corrosion engineering. It is presented to a senior corrosion engineer who is a leader in their field and has advanced European collaboration and the development of international standards.

The recipient of this award receives an engraved trophy of a modern design and is asked to present a brief overview of their activities as well as prepare an article for publication in the Corrosion Management magazine.

The winner of the 2020 Paul McIntyre award was Carmen Andrade. Until her retirement, Dr Carmen Andrade was a Research Professor at the Institute of Construction Sciences “Eduardo Torroja” of the Spanish National Research Council (CSIC), working in the field of concrete durability and reinforcement corrosion.

At present Dr Andrade is visiting Research Professor at the International Centre for Numerical Methods in Engineering (CIMNE). She is the author of numerous papers, has been editor of several  books, and has supervised around 30 PhD theses. She has received several awards, including the R. N. Whitney Prize 2013 by NACE, Robert L’Hermite Medal 1987 from RILEM,  “Manuel Rocha” of the Presidency of Portugal, and the “ALCONPAT  Prize” in recognition her distinguished career.

She has participated in several standardisation committees at National, European and International level and has been President of several international organisations related to her specialty (UEAtc, RILEM, WFTAO and the Liaison Committee which brings together the Associations: CIB, FIB, IABSE, IASS, RILEM and ECCE).

At present she is also the President of ALCONPAT, the Latin American Association of Control of Quality, Pathology and Recovery of Structures. She has been General Director of Technology Policy of the Ministry of Education and Science, and advisor to the Secretary of State for Universities in the Ministry of Science and Innovation, Spain.

The winner is always announced at the annual Corrosion Engineering Division Working Day and Symposium. To attend this year’s Working Day, which will be held online via Zoom, on the subject of ‘Managing Corrosion in Low-Carbon Energy Technologies’ please download the information leaflet and return the registration form.

The premier scientific award of the Institute of Corrosion, the U.R. Evans Award is presented by the President of ICorr to an eminent researcher, corrosion scientist, academic, or industrialist as reward for outstanding achievements in pure or applied corrosion science.

The recipient of this award receives a broadsword, and one that takes an edge – which has proved somewhat problematic in previous years. It can be difficult taking the sword back through airport security or displaying it in your office at university!

The sword symbolises our collective and eternal struggle against corrosion, and the U.R. Evans awardee is also recognised with the granting of an Honorary Life Fellowship of the Institute of Corrosion.

The sword’s design has been modified slightly over time, and is no longer made from stainless steel. While a proper sword, if kept in non-ideal conditions it can corrode slightly. “But clearly, the recipient should be able to deal with any corrosion, given their background,” says Dr Julian Wharton – to whom you should submit nominations via his email.

Professor Robert Cottis was appointed Professor Emeritus in Corrosion Science and Engineering on his retirement in 2011 after an exceptional career in the field of corrosion science. Here’s a potted history of his life in corrosion science:

He was the Director of the TLTP Consortium – which developed the Ecorr courseware to support corrosion teaching – and the founding editor of the open-access online Journal of Corrosion Science and Engineering.

In 2005 he was awarded the T.J. Hull Award of NACE International for services to NACE in the field of publications, and he is a NACE Fellow.

Who will be this year’s recipient of the U.R. Evans Award? Send your nominations to Dr Julian Wharton. Then watch for details of this year’s Corrosion Science Symposium to find out.