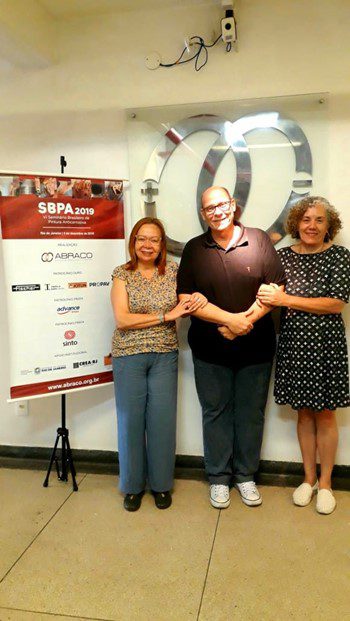 The Institute of Corrosion and ABRACO have now reached a major milestone in a collaboration that stretches back to May 2018. Coating inspectors who have qualified in Brazil as ABRACO Paint Inspector Level 1 can now take a conversion module and gain the internationally recognised coating inspector qualification as ICorr Coating Inspector Level 2.

This is a huge step in developing closer ties between ABRACO and ICorr, and a partnership that will go beyond technical recognition. It will help Brazil’s professionals to be immediately recognised as competent for coating inspector jobs on the international stage with the recognition of an international coating inspector qualification, and help ICorr and its members gain greater exposure and recognition in another of the world’s most important economies.

This is the story of how, together, we unravelled the complexity of developing this conversion model.

A meeting between ICorr’s Lucia Fullalove and Florentina (Flor) Melo, and Isaac Catran of ABRACO at the INTERCORR (International Corrosion Congress) in Sao Paulo in May 2018 proved to be the starting block for the ICorr-ABRACO collaboration project.

It was during this meeting that the three realised the synergies between the ICorr and ABRACO, and between the corrosion inspector courses for which both bodies are responsible. The three became excited by the idea of developing these synergies for the benefit of both organisations and their members, and presented the idea to the then President of ABRACO, Professor Paerce de Paula Lunes.

A letter was sent from ABRACO to the then President of ICorr, Sarah Vasey, outlining the proposal and its primary goals:

A Memorandum of Understanding (MoU) between ABRACO and ICorr was agreed and signed by the new presidents of both organisations in 2018 (Dr Gareth Hinds of ICorr and Dr Olga Ferraz of ABRACO).

To deliver the second of these primary goals, Lucia, Flor, and Isaac set to work on developing equivalence for the certification of coating inspectors.

It became immediately clear that there was a lot of work required. For example, in Brazil, paint inspector certification is divided into two levels, whereas ICorr’s certification model is based on three levels.

Evaluating how to provide equivalence in coating inspector certification

John Fletcher of ICorr was tasked with appraising and evaluating differences between the coating qualifications, and asked to put forward proposals on how the certifications could best be aligned. By December 2019, John had completed his gap analysis. His major findings were that:

John’s proposal was for equivalence to be achieved by developing and introducing a conversion module for ABRACO’s Level 1 qualified paint inspectors to ICorr’s Level 2 certification.

In 2020, and armed with John Fletcher’s findings, Lucia, Flor, and Isaac carried out a mapping exercise between the relevant Brazilian and international standards.

This work was crucial to help ICorr become acquainted more fully with the differences between the two programmes, and to understand that Brazilian paint inspectors have the level of work practices that is equivalent to their international counterparts, despite working to local standards.

In Brazil, health and safety activities are conducted by a Health and Safety qualified engineer and a Safety Medical professional. Further, corrosion protection professionals in Brazil must follow technical standards that are supported in the country’s laws – even down to how paint containers are stacked in storage.

With a better understanding of these key differences, work could begin on creating the conversion model.

With the work completed and the conversion course uploaded to the IMechE Learning Management System, Brazilian paint inspectors can now take the conversion module, sit an online exam, and, if successful, have their ABRACO L1 Paint Inspector certification confirmed as ICorr L2 Coating Inspector.

The collaboration between ABRACO and the Institute of Corrosion is beginning to bear fruit.

The delivery of the conversion course from ABRACO Paint Inspector Level 1 to ICorr Coating Inspector Level 2 is only the start. This demonstrates the ability of ICorr and its membership of experienced corrosion experts to collaborate and work effectively towards collective goals – even in the toughest of global environments.

Like so much else around the world, our plans have been hampered by the Covid pandemic, but we’re now on track to accelerate the ICorr/ABRACO alliance, developing areas for growth in Brazil and enabling more Brazilian corrosion professionals to become internationally recognised for their expertise.

Watch this space for more news soon. In the meantime, to learn more about the Coating Inspector Conversion Module, please contact John Fletcher by email at info@corrodere.com.