The Birth of Apprenticeships for Industrial Coating Applicators 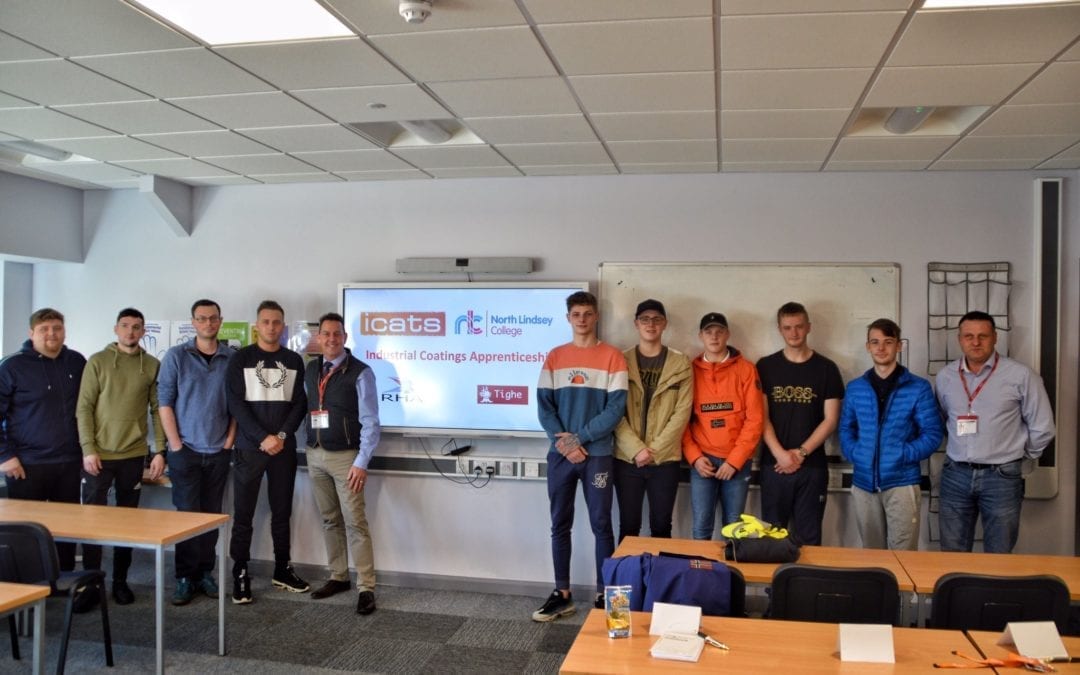 The first Industrial Coatings Applicator Apprenticeship (ICAA) has now been completed, and all apprentices who took part in the programme passed with distinction. The Institute of Corrosion spoke to the driving forces behind the ICAA programme, and asked how they not only developed the training programme, but also managed to get this much needed apprenticeship programme into the marketplace.

Why are apprenticeships for industrial coatings applicators needed?

The country’s infrastructure is under constant attack from the environment. Such infrastructure includes structures such as bridges, sports stadia, buildings, hospitals, lighting columns, and wind turbines.

Industrial coatings applicators prepare steel surfaces and apply protective coatings to protect them against corrosion. They may work closely with coating inspectors, for whom separate and specialised coating inspection training is available.

What difference will ICAA make to industry?

The whole of the industry is trained and regulated, except for applicators. This apprenticeship, when coupled with the Institute of Corrosion’s applicator training scheme (ICATS), is the first time that this gap has been rectified.

David Mobbs had responsibilities for the End-Point Assessment on behalf of ICorr, and he recalls how one of Jack Tighe’s existing applicators, who was applying epoxy PFP in the factory told him, “There wasn’t anything like this when I joined. I just got given a paint brush.”

Stephen Hankinson, Chairman of Hankinson Whittle Group, explains how the concept of apprenticeships for industrial coatings applicators came from an idea to reality.

“The journey really started at a meeting of the Advisory Committee for National Highways Sector Scheme 19A back in October 2015.

“An employers group was established from 19A accredited companies. We also established a sub-committee training group, chaired by David Horrocks from BAM Nuttall Ltd. David was ideally placed with a vast knowledge and experience in the coatings industry spanning some 38 years. The group also included other members from the Advisory Committee – Jeff Bowden and Lance Williams from Highways England, and also Pete Walker from the British Constructional Steel Workers Association (BCSA). All on the sub-committee were a great help in getting the standard developed.

“19A specifically deals with corrosion protection and therefore has always had an interest in raising quality standards within this sector. As a committee, we recognised for a number of years that there was a shortfall of new young entrants coming into the sector.”

(Watch the video on YouTube: ‘How the first Ever Industrial Coating Applicator Apprenticeship Was Created’.)

The passion behind the mission

David Horrocks, Materials Engineer at BAM Nuttall Ltd., chairman of the Professional Development, Training and Certification Committee (PDTC) for the Institute of Corrosion, and Fellow of the Institute, is passionate about the apprenticeship programme and says, “I was delighted to be a part of this apprenticeship development and to chair the committee was a real pleasure.

“As a committee in Highways England, we were and still are very passionate about making sure that the UK’s infrastructure is protected for many years to come,” David says. “I think that one of the key things that was highlighted within that committee was that the government had started to demand that more apprentices were trained in various sectors.

“The industrial coatings applicator sector didn’t have that in place, so there was a gap in the market that needed filling. We were clearly keen to see this come to fruition.”

The training committee took on responsibility for creating the standard, with a view to providing a pathway for training providers to deliver this much needed apprenticeship programme for industrial coatings applicators.

There was a period when apprenticeships were scoffed at. Certainly, the Young Trainee Scheme (YTS) of the 1980s seemed to morph apprenticeships into cheap labour programmes. Thankfully, today’s modern apprenticeships provide real opportunities for youngsters to gain skills, qualifications, and a pathway into rewarding careers.

“The apprenticeship standard in terms of the committee developing it, was something of a passion of mine to get over the line,” David Horrocks says. “Leaving school and getting an apprenticeship or ‘trade’ is the best way to start a career in this industry and certainly the first step towards further opportunities in this exciting industry.”

It took a lot of hard work and dedication to get the ICAA standard developed, written, created, accredited, and available for employers to take on. But it has proved to be worth every ounce of effort.

In late 2018 the ICAA apprenticeship standard was accepted by the Institute For Apprenticeships, which was shortly followed by classroom candidates taking their seats in early 2019 at North Lindsey College in collaboration with Jack Tighe Ltd.

“I met the apprentices at North Lindsey College during their initial introduction to the apprenticeship programme. This was an absolute privilege for me,” David Horrocks says. “I presented to the class in terms of how they could progress from being an industrial painter, into paint inspection, and even management.”

Stephen himself is no stranger to the power of apprenticeships to change lives. Hankinson Whittle runs its own apprenticeship schemes, and has witnessed apprentices make similar career progression to that experienced by David Horrocks. “There’s something about seeing your hard work in developing others bear real fruit,” he says.

David Horrocks agrees. “It is this pinnacle of seeing this developed that gives me the passion to make sure this continues for many years to come.”

In our next article, we meet John Whittaker, Training Manager, and Sam Panter, who is Health & Safety Director of Jack Tighe Ltd., the first employer to run the ICAA scheme in the United Kingdom. They tell us about their journey in taking the apprenticeship standard and developing a new apprenticeship programme for Industrial Coating Applicators.