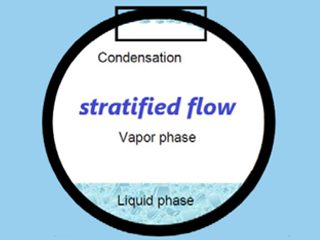 Question:
What is Top of the Line Corrosion?  When would you expect this, and how do you mitigate against it?  BK

Answer:
Top of the line corrosion most commonly occurs in wet gas pipelines. It takes place on the top section inside the pipe (hence the name – top of the line corrosion) due to condensation of water containing corrosive agents, such as CO2 (‘’sweet’’ corrosion), H2S (‘’sour’’ corrosion) and acetic acid (HAc).
The flow regime has an impact on this mechanism, as it mostly occurs in pipes with stratified and wavy-stratified flow regimes – these allow for the condensation process to take place uninterrupted, and for that reason makes traditional liquid corrosion inhibitors not very effective in protecting against this type of corrosion, as liquids stay in the bottom area of the pipe and the protective film isn’t formed on top area of the pipe inner surface. 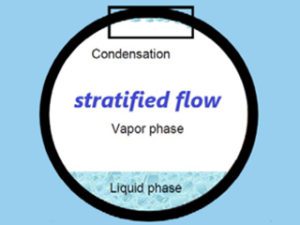 and the overall reaction is,

The effectiveness of corrosion inhibitors in protecting pipes against top of the line corrosion varies and highly depends on the volatility of the chemical. You can find a variety of papers on this subject in NACE archive.

Question:
What criteria should an inspector/owner use to determine whether to specify full removal or sport repair of a tank lining?  PS
Answer:
There are many thoughts regarding the timing for replacement of vessel linings and whether it should be a total or partial replacement. Lining failures occur due to various mechanisms, the most common among others being the following:
•          Blister formation due to osmosis through the coating caused by surface contamination on the steel substrate during preparation.
•          Solvent entrapment in the coating
•          Adhesive failure of the coating to the steel substrate caused by surface contamination, inadequate profile, material applied outside its pot life or incorrect ambient conditions.
•          Explosive decompression where molecules of a substance that at the operating pressure are liquid but are gaseous at ambient migrate into the coating during operation but in a rapid shut down situation blow sections of the coating apart, this may take several cycles to effect this result.
•          Thermal stress cycling, due to differences in the linear thermal expansion characteristics between the substrate and the coating, thermal cycling sets up a series of stresses which compromise the cohesive and adhesive strengths of the coating system.
•          Mechanical damage from either internal or external sources
•          Chemical attack of the lining due to the introduction of liquids into the vessel that destroy the coating integrity in either small or high concentrations.

The above list is not exhaustive, but gives a feel for the problems associated with vessel lining performance. Because of the potential for failures to occur during service, it is a bit of a lottery estimating the life expectancy of a coating system. A vessel operating at ambient temperature and pressure with a non-aggressive liquid will have a greater life expectancy than a similar lining exposed to varying temperatures and pressures with an aggressive mixture of liquids. Coating manufacturers on the whole will quote life expectancies for what they expect an ‘average’ exposure to involve.
When inspecting a vessel lining that has been in service for a period of time, any breakdown present needs to be carefully analysed to check whether it is a local failure with a driving force that is not uniform throughout the vessel, or whether what is encountered is the first stages of total lining failure. This can be a hard call for the inspector as the decision on whether a total reline, or a series of spot repairs, could lead to a premature/ catastrophic failure of the lining when put back into service especially when under pressure to get a vessel back in service as fast as possible.

From an inspection point of view, a lot depends on the inspector visually identifying the defects present. This should then be backed up by non-destructive tests to determine if the coating still meets specification – the most useful of these being to check the dry film thickness to look for wastage and coating thinning, and these need to be taken over the entire vessel, concentrating on the areas such as nozzles and edges where thinning of the coating is likely to be prevalent. Spark testing at 4Kv per mm of coating will show up any holidays along with other defects such as porosity and inclusions. Destructive testing such as dolly pull-off adhesion tests will give a good indication of any potential reduction in adhesion/cohesion but the test area requires to be repaired.

Spot repairing a vessel lining tends to be a short term fix as the repair itself can end up creating a weak spot. Preparation is invariably of a lower standard that that used to prepare a full vessel, ie power tool, which does not give a long term life expectancy for the lining. If blasting is used, it is essential to remove all corrosion salts and contamination from the affected area, chase back to a firm feathered edge.  Spot repairs result in large amounts of ‘free’ edges where future breakdown may readily nucleate from. When blasting in a vessel to undertake spot repairs there will inevitably be collateral damage from the blasting operation in the form of overblast and ricochet which can lead to coating weakness and potential failure.

If a coating is reaching the end of its expected life it is not advisable to spot repair except in extenuating circumstances, as the failure rate will become unacceptable and damage to the vessel shell will occur. A new coating system should be used that will give the optimum life expectancy, consideration also to be given to the life of the vessel. Under most circumstances it is preferable to completely renew a coating system, changes in the operating parameters need to be taken into account as these may have changed since the original specification was drawn up, it is worth looking at failures and using these to learn from to improve the specification.
Bearing the above comments in mind, the following procedures and systems should be used:

•          100% visual inspection after clean out to identify through coating failures
•          Dry Film Thickness check, all nozzles, edges and welds with at least 3 readings per m² to check for thinning/wear on the coating, minimum acceptable is 15% below specified thickness
•          100% holiday detection to find any pinholing or porosity defects
•          Finally, if deemed necessary, apply dolly pull off adhesion tests to check for reduced adhesion of delamination.
•          Report findings to client.

Under normal circumstances, a failure rate in the order of 15 to 20% or greater would be deemed as uneconomical to spot repair as the effort needed would be as great as that to recoat fully, the percentage being based on the percentage area of the vessel shell that will receive new coating, not the percentage area of visible failure or corrosion. What initially appears as a small defect of say nominally 10mm x 10mm will probably end up as a repair of the order 400 to 500mm diameter if done correctly.
Simon Hope, Auquharney Associates ltd

Readers are reminded to send their technical questions, for answer by the panel of experts, to the editor at, brianpce@aol.com 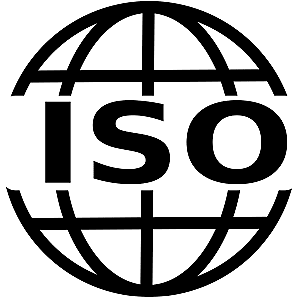 The following documents have obtained substantial support during the past two months and have been submitted to the ISO member bodies for formal approval.

ISO 10270:2022 Corrosion of metals and alloys — Aqueous corrosion testing of zirconium alloys for use in nuclear power reactors

A recently published review discusses the various types of epoxy-based antifouling coatings as cost-effective and environmentally sustainable solution to biofouling. The need for nontoxic antifouling coatings has encouraged material scientists to develop a new class of epoxy coatings. As a versatile thermosetting resin and well known for various coating applications, antifouling characteristics have been integrated into epoxies along with anticorrosion and adhesive functions. Accordingly, both micro- and macro-biofoulings have been successfully controlled by using epoxy-based antifouling coatings, and epoxy nanocomposites, silicon-grafted epoxy, epoxy-aided conductive polymer blends, and nanocomposites are important antifouling epoxy variants This newly published review discusses the various types of epoxy-based antifouling coatings. The ability of nanomaterials, siloxanes, and conducting polymers to induce antifouling activity into the epoxy and corresponding antifouling mechanisms is also covered. The review concludes with the enormous potential of antifouling epoxy coatings as cost-effective, environmentally sustainable solutions to biofouling in diverse industrial applications.
The study was published in Journal of Coatings Technology and Research, Volume 19, 2022. In a recently published study, the effect of a partial replacement of spherical zinc particles by stainless steel flakes (SSF) on the corrosion protection performance of a zinc-rich epoxy (ZRE) coating was studied. Salt spray test, open circuit potential, electrochemical impedance spectroscopy and potentiodynamic polarisation tests were utilised to evaluate the anticorrosion performance of the coatings.

The results demonstrated that a partial replacement of zinc particles by SSF enhanced the anticorrosion properties of the ZRE coating, and the enhancement was attributed to the synergistic effects by increasing the coating impedance and extending the cathodic protection duration.
The study was published in Progress in Organic Coatings, Volume 163, February 2022. 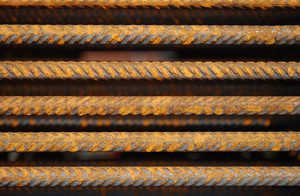 The corrosion of steel bars is the main reason for the premature failure of reinforced concrete structures, and coating reinforcement is considered to be an effective method to protect steel bars from chloride attack. A recent publication, describes the development of a graphene oxide (GO) modified silane composite coating (isobutyl triethoxysilane combined with tetraethyl orthosilicate) for the corrosion protection of reinforcement bars. The physicochemical characteristics and corrosion resistance performances of mild steel coated with this composite coating was examined by scanning electron microscopy, Fourier transform infrared spectroscopy, thermogravimetric, Raman analyses, and electrochemical measurements.

The results indicated that the coating with a thickness of about 45 µm exhibits substantial corrosion resistance with a maximum protection efficiency of about 99.36% in chloride media. The superior corrosion protection performance is attributed to the formed covalent bonds between GO and silanol, which strengthens the three-dimensional network structure of the coating. In addition, the uniformly distributed GO immensely slows down the degradation of silane coating structure and improves the stability of the coating, and thus delays
the corrosion.

The study was published in Progress in Organic Coatings, Volume 164, March 2022.