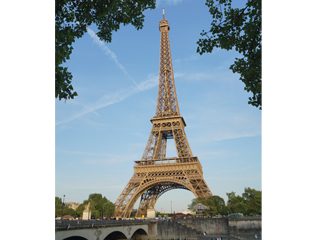 In a leaked confidential report, it’s been suggested that Paris’ Eiffel Tower is in poor condition given the amount of rust plaguing the structure.

According to the French magazine Marianne, who received the leaked report, the monument requires a full repair which experts have noted would involve stripping the structure to bare metal, various repairs and repainting.
Completed in 1889, the Eiffel Tower in Paris was constructed as part of the world’s fair. Designed and built by civil engineer Gustave Eiffel, the historic landmark stands 324 meters (nearly 1,063 feet) tall and is made of 7,300 tons of puddle iron—giving the structure its nickname, “The Iron Lady.”

Puddle iron was invented in Britain during the Industrial Revolution through a process that produced high-grade and purer wrought iron by removing carbon from pig iron in the melting process. These metal pieces were then placed together with what is estimated to be 2.5 million rivets.

Before officially opening to the public, the Eiffel Tower

received four coats of red lead paint. Although banned today, at the time lead paint was believed to be the best anti-corrosive agent. Despite its ability to prevent corrosion, Eiffel suggested that the structure would need to be repainted every seven years.

According to the report, despite regular maintenance coatings work, the tower requires more than the current 60 million euros ($61.2 million) painting “facelift” its undergoing. This recoating work on the structure is still underway as Paris prepares for the 2024 Olympics.