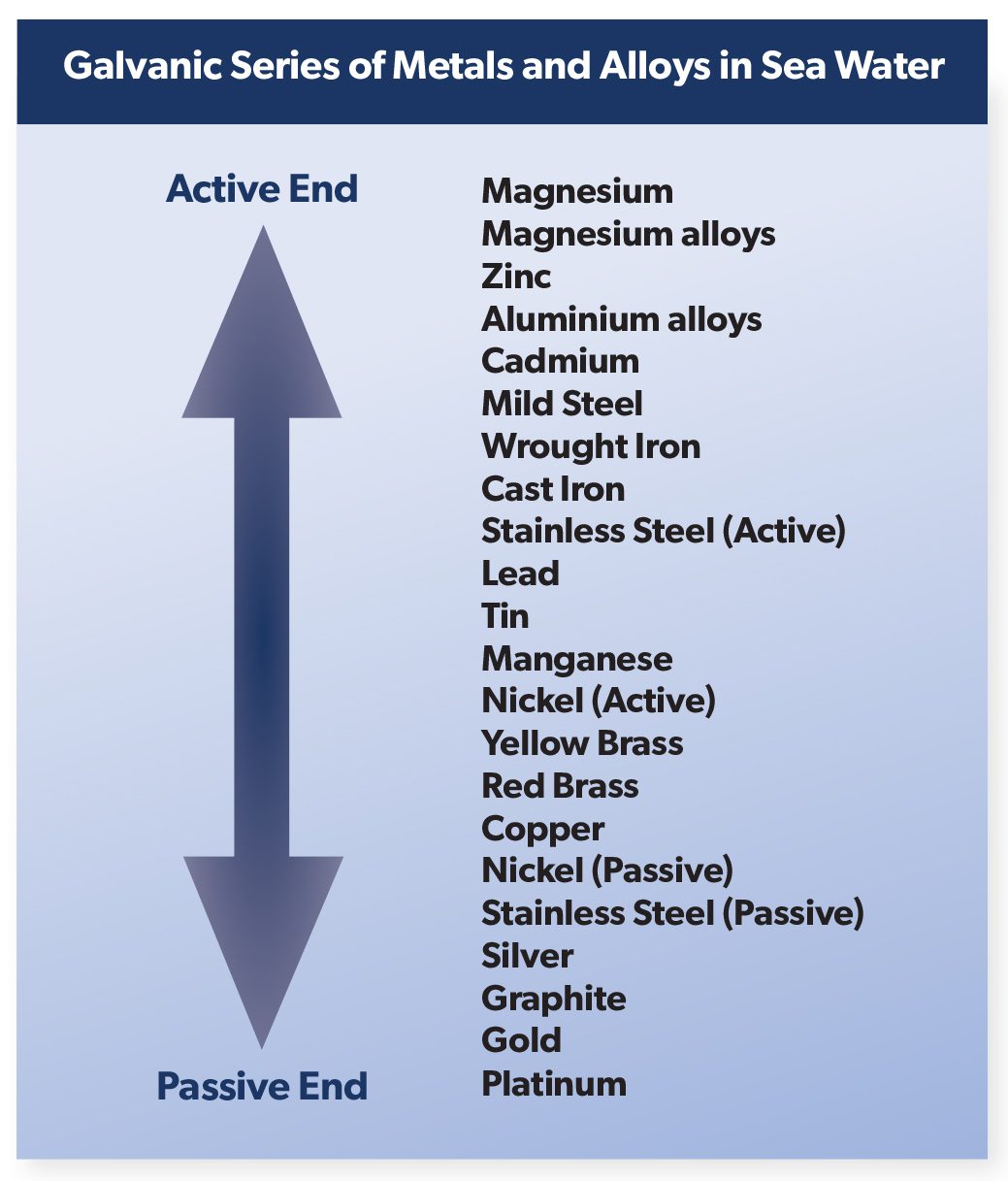 Protecting metallic structures from corrosive attack is not just about using coatings or cathodic protection, the design of the structure also plays an important part.  There maybe situations which call for two different metals, or alloys, to be joined. If these metals are electrically connected under conditions permitting the formation of a “corrosion battery”, then in this situation, one metal can corrode preferentially in relation to the other metal to which it is physically and electrically connected. This is termed “galvanic corrosion”.

Galvanic corrosion is an extremely important corrosion process, and one that is frequently encountered. The principles of galvanic corrosion are used to advantage in the cathodic protection of surfaces by using sacrificial metal anodes or inorganic protective coatings.  The Galvanic Series lists the activity of metals in order, from the most active (magnesium) to the least active (platinum).  When two metals are connected, the metal located higher up the scale will corrode preferentially, and thereby protect the metal lower down the scale from corrosion attack.  As an example, if copper and zinc are connected together, the zinc will dissolve, or be corroded preferentially, thus protecting the copper. The metal attacked is defined as the anode, thus the zinc will serve as an anodic area, and the copper will form the cathodic, or the protected area. The function of each will be identical to that found in the typical corrosion cell, as in the set up for rusting of iron. The intensity with which the two metals react in this preferential manner can be measured by the distance between the two metals in the Galvanic Scale.  As magnesium is at the top of the scale it will have a tendency to corrode in preference to any other metal shown on the Galvanic Scale, conversely, platinum, which is extremely inert, never corrodes preferentially. While the tendency to corrode depends on the kinds of metal coupled together, the rate at which the corroding anode is attacked depends on the relative area of the anodes and cathodes joined together.

If a small magnesium anode is coupled to a large area of steel (as in protection of a ship’s hull), the anode area (being small as compared to the cathode area) will corrode very rapidly. This is due to the entire galvanic current being concentrated on a small area of active metal.  Conversely, if the cathode area is small compared to the anode area the corrosion of the anode will be relatively slow, since the demand on the anode is spread evenly across the whole surface of the metal. It must be kept in mind that the areas of each metal involved are those in electrical contact and not just the areas of metal in physical contact. The area of metals in electrical contact will be determined by those areas which are in contact with an external conductive circuit (electrolyte).

For example, in the use of rivets of one metal to fasten together plates of different metal, we find an excellent example of possible effects of galvanic corrosion. If steel plates (anodes) were joined with copper rivets (cathodes) only a very slow corrosion of steel would occur, since the galvanic corrosive effect is spread out over a large area of steel. On the other hand, if copper plates (cathodes) were joined with steel rivets (anodes), a rapid rusting of the rivets would occur. The small area of rivets would be attacked by all the galvanic current generated by large copper plates and would corrode rapidly.