According to the press release, over the last decade, it has been established that chlorine-induced corrosion is affecting some of the major structures at NSW Ports, including Sydney Harbour and Port Botany, Australia’s largest container port.

As a result, NSW Ports commissioned Infracorr to design a CP system for use at BLB1, which is located at Port Botany and contains hazardous gas pipelines. The project also included the repair of defective concrete structures which were suffering from the effects of corrosion and concrete spalling in the many pre-stressed beams and headstocks of the various bridges and catwalks at the port.

The CP system needed to be designed to allow for tight control of the currents and voltages used across the site, due to the presence of hazardous materials in the environment on an ongoing basis, meaning that any stray sparks caused by excess voltages and currents could become an ignition source for a major fire or explosion, and that as many of the structures present are constructed using pre-stressed concrete, it was extremely important that all electrical currents applied were carefully controlled to avoid structural damage caused by over protection.
One of the big technical challenges for the project was that there was no off-the-shelf CP system available that had certification for use in zone 1 classified hazardous areas, which meant that a bespoke system had to be designed that met the cathodic protection objectives, including dealing with the challenge of prestressed concrete, and that could be certified to meet the necessary requirements under AS60079 regulations.

The system designed for use at BLB1 by Infracorr, was a hybrid CP system that combined the properties of both passive galvanic and impressed current cathodic protection. It works by inserting specially designed anodes directly into the structure in a matrix. A voltage is then applied to force salt migration from the steel to the anode and passivate the zone, and when the zone is sufficiently charged, the power source is disconnected, and the sacrificial anodes are left to operate galvanically, providing passive protection to the structure.

The system relies on remote monitoring technology to provide asset managers with ongoing reassurance that it is operating as intended, and corrosion levels are under control, and to deliver this, Omniflex were asked to advise on the remote monitoring aspects of the design.

Because this was the first large scale implementation of hybrid CP used in a working hazardous area anywhere in the world, some components needed certification for the design to meet the requirements of AS60079 as an intrinsically safe certified system, which was subsequently obtained.

System performance and corrosion levels are continuously monitored 24/7 using 24 remote monitoring units situated throughout the site, each with the capacity to monitor 16 structures. This should ensure that the integrity of BLB1 is maintained, and the berth remains reliable and available to handle NSW’s growing bulk liquid trade volumes for the next 50 years. For further information, visit www.omniflex.com 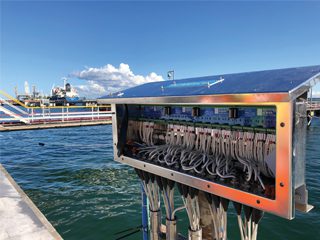