Formicary, [1] or ant-nest corrosion [2] – based upon the similarity of substrate damage with an ant’s nest (Figure 1) – dates back about fifty years. [3,4]. Formicary corrosion is a rapid acting process involving the conjoint presence of oxygen (air), moisture and a weak organic acid. It may be regarded as a “hidden” phenomenon because, (a) it is unknown to those who have not experienced it first-hand, and (b) it is challenging to identify, because the surface pin hole leak sites are often so fine that they are not visible to the unaided eye (Figure 2). Generally considered unique to copper, this insidious form of internal corrosion (Figure 1) comprises of micro-pitting networks (akin to tunnels) [5,6] that can fully penetrate small bore tubing in weeks, not years. Pin holes that occur on the outer or inner diameter surfaces are commonly surrounded by zones of discoloured copper, ranging from dull gray/black to red/brown or purple hues (Figure 2). Refrigeration-grade copper tubing, [7] used throughout the HVAC industry, was ravaged for decades (Figure 3) and 10% of all premature failures were attributed to formicary corrosion.[8] 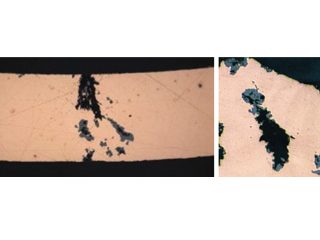 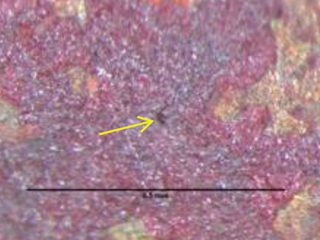 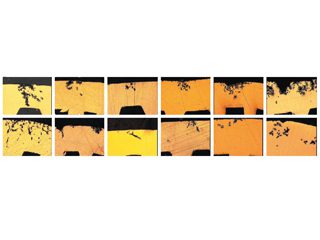 Mechanism of formicary corrosion
Extensive research by the Japanese Copper Development Association [10,11] showed that formicary corrosion occurs when certain residual organic compounds degrade in the simultaneous presence of air and moisture, to produce carboxylic acids, such as formic, acetic, propionic and buteric acids. This finding was pertinent to the HVAC industry (Figure3), where synthetic lubricating oils used for forming coils, and degreasers/detergent cleaners, contained such compounds.
The general mechanism involves a micro anode, where dissolved copper ions combine with carboxylic acids (HCOOO-) to form an unstable cuprous complex Cu(CHOO), which is oxidised to form cupric formate, acetate, etc., 2Cu(CHOO)2 (cuprous complex) and cuprous oxide (Cu2O).
Microcracks with localised intergranular attack, caused by a wedging effect from the volume expansion in forming the cuprous complex and cuprous oxide [6,12] initiate at weaknesses along the corrosion pit wall, exposing more surfaces of copper to perpetuate the advancing corrosion process.

Recognising formicary corrosion
Once the locations of the fine pinholes are found – by water immersion pressure testing, macroscopy, or both – optical microscopy will confirm if the images display the unique metallography of the formicary tunnels (Figures 1, 3), which are significantly different from the smooth hemispherical contours associated with general pitting corrosion of copper (Figure 4). 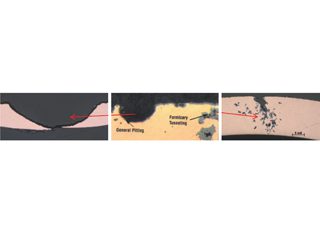 As industries have become more familiar with the causes of formicary corrosion, the frequency of leaks has fallen. Research [13]1 sponsored by the Air Refrigeration Technology Institute (ARTI), to develop a reproducible screening method to determine the mechanisms and effects of corrosion,[14] resulted in a hydrolytic stability test, which uses ion chromatography to ensure that lubricant drawing oils and finning lubricants are free of carboxlic species. A separate pre-screening hexane rinse of copper tubing, provides evidence of residues with carboxylic species identified using Fourier Transform Infrared Spectroscopy (FTIR). Several HVAC equipment manufacturers have made material and design changes, including, tin-plated copper hair pins and tubing less prone to attack, ductless AC units with moisture filters, and all-aluminium tubing and fin construction.

Selected examples of formicary corrosion leakages presented herein, include, HVAC coils with pin holes on the outer (OD) or inner (ID) diameter surfaces (Figures 5, 6), and a heat exchanger from a fabrication shop (Figure 7). 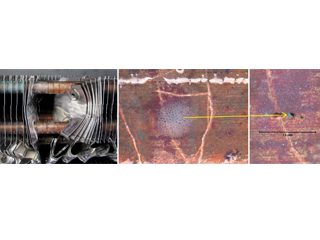 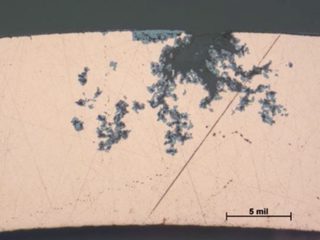 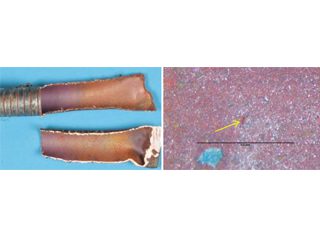 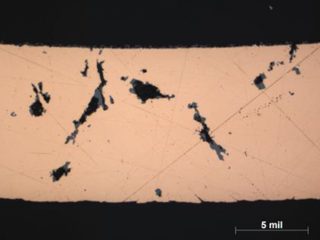 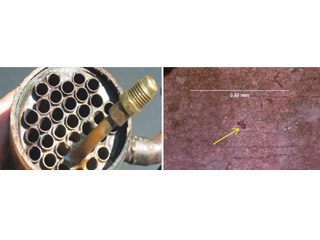 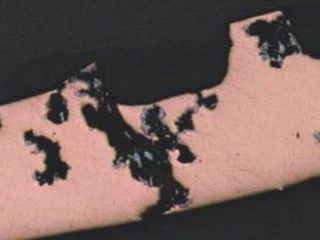 • Failed HVAC installation – pin holes found following about 2 to 3 years service were claimed by the coil supplier[15] to display the “worst case of formicary corrosion ever seen”. They were incorrect. The observed damage (Figure 8), and the optical photomicrographs (Figure 9), show no micro-pitting networks – the chacteristic feature for formicary corrosion. 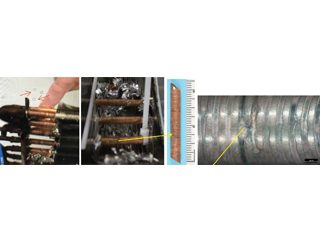 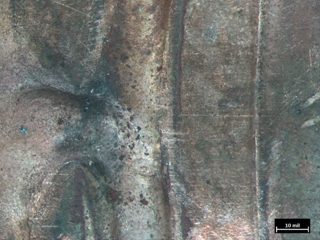 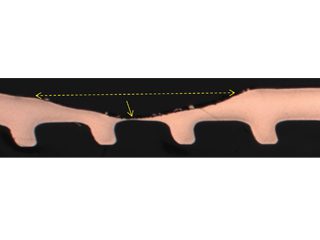 The leak locations along the copper tubing appear to be associated with the design and assembly of the ceiling-mounted units. The repeating geometric pattern of hemispherical- shaped wastage zones close to, or in direct contact with, the aluminium fins, (Figure 9) suggests a modified form of Rosette corrosion,[16] combined with crevice corrosion,[17] and galvanic attack. [18] The additional pitting in the vicinity of the through-wall leaks (Figure 8) is indicative of some form of synergy between these processes.

Rosette corrosion is a somewhat recently recognised corrosion phenomenon,[19] which was encountered in copper hot water cylinders fitted with aluminium anodes. The anodes were installed to prevent type 1 pitting corrosion and was very successfully applied for over 30 years.[20] However, corrosion failures were occurring at the bottom of these cylinders where the water was cooler. This phenomenon was attributed to the interaction of the copper-aluminium galvanic couple [21] and certain impurities in the water that generated reducing species that led to the corrosion at the bottom of the cylinders. This form of corrosion has been essentially eradicated in the United Kingdom, when specifications disallowed the use of aluminium protector rods in 2002.[22] The removal of the aluminium anode and a redesign of the hot water cylinders eliminated the cold bottom thus promoting the growth of a semi-protective corrosion layer.

• Formicary corrosion by contact with sealant – accounting for a blue discoloration surrounding a usually white-colored acoustic sealant (Figure 10), a recent publication wrongly implied that tube failure by formicary corrosion and environmentally assisted cracking (EAC) from such contact was probable. [23] Long-term simulation testing with high relative humidities and temperatures showed this was most unlikely.[24] Without a sustained presence of air and moisture, through-wall penetration by formicary corrosion – a rapid process, as noted earlier – is not expected. Mechanical laps from tube-forming (Figure 10) were wrongly interpreted as EAC with formicary corrosion. This matter was addressed nine years ago, [25] the blue discoloration was nothing more than an aesthetic issue. 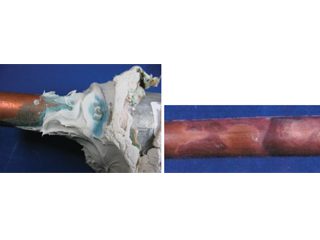 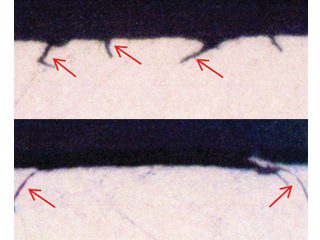 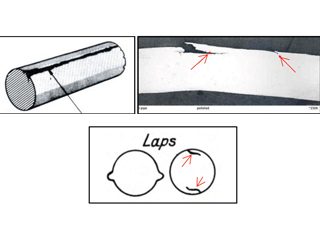 Discussion and conclusions
Formicary corrosion is regarded as a subsurface network of microscopic-corroded tunnels that are considerably larger than the tiny pin holes they connect to, [27] which presents a challenge to those who are aware of the “usual” localised phenomenon of pitting corrosion,which ranked fourth from seven common sources of copper tube corrosion based on over 1,500 investigations over 25 years in domestic water systems. [28] This source noted that all can be mitigated cost-effectively provided that, water quality is maintained, copper tube systems are properly designed and installed, and systems are operated within design parameters.

Formicary corrosion may be active if:
• fluids leak in weeks or months.
• surface zones of discoloured copper (dull gray/black to red/brown or purple hues) are evident.
• copper exposed to air (oxygen), moisture and a weak organic acid, e.g., carboxylic acids, (formic, acetic, propionic, buteric).
• copper exposed to other chemical sources, including chlorinated organic compounds and hydrolysis products from decomposition of esters, aldehydes and alcohols (carbonyls).
• wet conditions persist under coatings, lagging, sealant contact, and insulated piping with compouds that hydrolyse to form carboxylic
acids.
Success in dealing with formicary corrosion, like many other forms of corrosion, is dependent on knowing what it is; knowing how to recognise it; knowing what causes it; and focusing on control, rather than elimination – the realistic goal. [30]

Acknowledgements
The author kindly acknowledges the contributions of Mr. Fred Sherman, Sr. Materials Analyst, for his meticulous contributions to the metallography and laboratory testing, and Mr. Brad Krantz, VP of Laboratory Services, for support and access to Corrosion Testing Laboratories, Newark DE.

Close up of OD pinhole leak and surrounding small pits.
Figure 8: Pin hole and other localised pits in one of many HVAC indoor coils.

Figure 10, Blue-stained sealant on copper tubing in hospital installation and shallow surface laps [26] misinterpreted as EACs and the initiation of formicary corrosion.