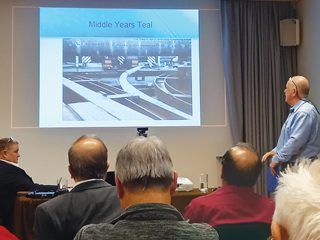 There was plenty of anticipation for the first in-person technical presentation of the branch since early 2020, a joint meeting with the London Materials Society (the London Branch of IoM3), which was held at the Lancaster Hall Hotel in London. The presentation was also streamed online for those who could not get to London- This was the first time such a hybrid technical talk has been held.

The presentation was delivered by Stephen Shapcott CEng FIMMM MICorr to mark his stepping down as Chair of the London Materials Society (LMS) and was titled, “Meeting Todays Materials Challenges to Enable Low Carbon Hydrogen Production at Scale”.

His presentation began by saying that many countries have made commitments to reduce environmental carbon emissions, and that the UK government has set in law the world’s most ambitious climate change target, cutting emissions by 78% by 2035 compared to 1990 levels. Stephen commented that for countries that are heavily reliant on the use of natural gas to meet the required reduction in carbon dioxide (CO2) emissions, they will need to choose and adopt low or zero carbon technical solutions.

Stephen explained that the UK government are investing in multiple hydrogen (H2) projects to replace much of the current uses of natural gas (methane, CH4), this is because when hydrogen is used as a fuel it does not emit CO2 at point of use, but also because of the versatility of hydrogen for heating, industry, transport, and energy storage. One such project is Hynet in the North West of England which plans to use advanced steam methane reforming combined with Carbon Capture, Utilisation and Storage (CCUS).

Steam-methane reforming takes methane and steam and converts them into hydrogen and carbon dioxide. The main differences between traditional steam-methane reforming technologies verses advanced reforming technologies, which use an Autothermal Reformer (ATR) or a combined Gas Heated Reformer (GHR) and ATR, were covered in the presentation. The traditional vs GHR + ATR routes were compared, showing the higher efficiencies and lower capital cost of GHR + ATR.

The remainder of the presentation focused on the material’s damage mechanisms in the core gas reforming section of both a traditional steam-methane reforming flowsheet and that of a typical GHR + ATR design. The damage mechanisms covered were High Temperature Hydrogen Attack (HTHA), Refectory Degradation, Steam Blanketing leading to Short Term Overheating and Stress Rupture, Creep, High Temperature Oxidation, and Metal Dusting (metal dusting is a destructive form of corrosion that occurs when susceptible materials are exposed to environments with high carbon atmospheres, and leads to the disintegration of the structural metal into dust composed of fine particles of the metal and carbon).

Stephen explained that most of the damage mechanisms in advanced reforming are widely understood and able to be designed for using established practices, however metal dusting is not one of them. Materials and corrosion engineering are central to managing the risks of metal dusting. Therefore, materials and corrosion engineers with deep experience and understanding of metal dusting are critical to GHR + ATR designs, as demonstrated experience not only ensures suitable equipment lifetimes, but also ensures reliability and operating efficiency. The UK was the location of the first GHR + ATR design as part of the ICI Leading Concept Ammonia (LCA) flowsheet at Severnside that was operational for over 20 years, making the UK a world leader in GHR + ATR technology.

There was an active Q&A from the audience both in attendance and online from around the globe. The presentation concluded with Stephen thanking ICorr and LMS for hosting the event and he presented the new Chair of LMS, Caroline Allanach, with the Chain of Office. 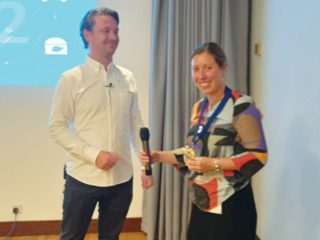 This first hybrid event was considered a success with 60 people attending, roughly half in person and half online, including from overseas, with some from UAE and Pakistan.

The November meeting featured an interesting presentation from Alex Garner, Corrosion Services Ltd, entitled “Lessons learned from 40 years in corrosion protection”.  As in the previous month, this talk was held in person and online.

Alex described the highs, with brief mentions of the lows, of his 40-year career in corrosion protection, including CP, material selection, coatings and insulation, for a wide variety of onshore and offshore facilities. His journey started in 1980 and he covered the technical and social challenges of office and site -based work in Europe, Middle East, Asia, Canada, South America, and Australia. as well as the corrosion protection peers encountered over the years, many of which are now his friends. This anecdotal presentation highlighted the pleasures and technical excellence that can be achieved in this industry and Alex hoped that it would encourage younger people tp take up a career in the corrosion protection industry, and not scare too many away from it.

45 people, roughly 50/50 in person/online, attended this very interesting presentation from an experienced practitioner in the field of corrosion protection.

The next meeting of the branch will be on 13thy January 2022 when Dimitrios Mamalopoulos from Cescor UK Ltd will present on. “Life extension of offshore platforms, through retrofit CP design assisted by modeling”. Again, it is intended to hold this in person at the usual venue, Lancaster Hall Hotel, Bayswater, London, and online vie Teams.  Final details will be posted on the diary page of the ICorr website. 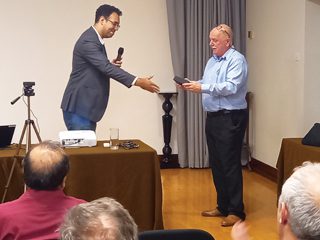