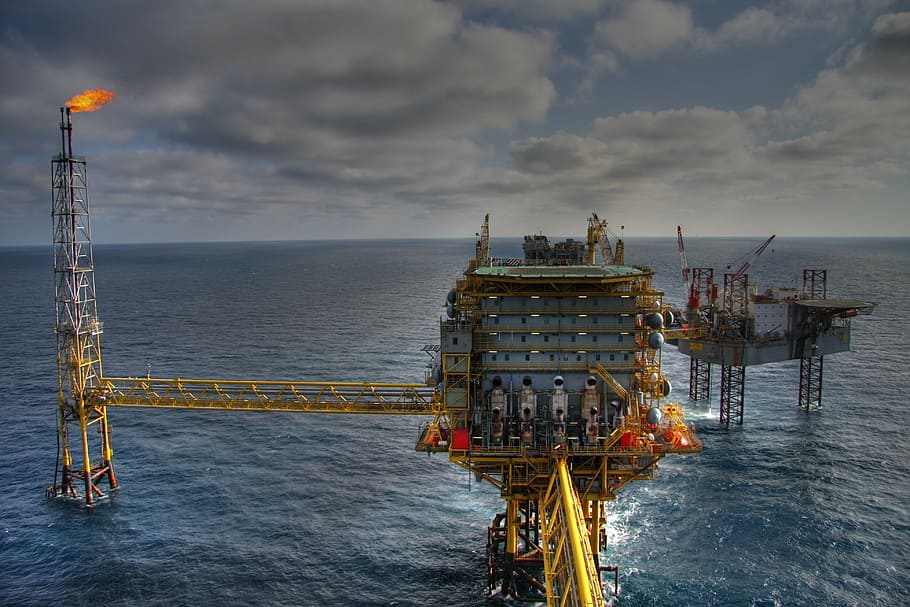 In this series of features from ICorr Fellows who have made significant contributions to the field of corrosion protection, Malcolm Morris discusses the use of Thermal Sprayed Metal Coatings.

An Introduction to Duplex Thermal Sprayed Aluminium (TSA)
Thermal metal spraying is a process by which a steel substrate is protected from corrosion by coating with atomised particles of softened or molten metal. The most commonly applied metals used for this process are aluminium (TSA), or zinc (TSZ), however any metal which is ductile and able to be produced in a wire form can be thermally sprayed, (e.g. tungsten, molybdenum, lead, and even silver or gold), plus combined alloys of zinc and aluminium.

The most common methods of application are:
Gas Applied: A process in which a coil of metal wire is fed to the tip of an application gun, where the metal is melted by a gas flame, and the molten metal is simultaneously atomised by compressed air jets and directed onto the substrate.

Arc Applied: Similar to gas applied – Arc spraying is performed by feeding two electrically conducting metal wires towards each other. An electric arc is produced at the point just before the wires meet. The arc melts the metal wires, and a high-pressure air line is used to atomise the molten metal into fine droplets which are sprayed onto the previously cleaned and prepared steel surface. Arc application gives faster productivity compared to gas application.
Thermally sprayed surfaces have historically been supplemented with protective coatings, in order to increase the level of protection, and also as a cosmetic coat to mask the appearance of the corrosion products of the metal spray, which appear as aesthetically poor, white salt deposits. Paint systems range from a relatively thin single coat (designed to fill and seal the porous voids in the film, which naturally occur in the application of the metal spray), to multi-coat high build systems which are intended to significantly extend the service life of the structure.

A common feature of all thermal spray coatings is their lenticular or lamellar grain structure. Due to the nature of the application, the molten metal cools and solidifies instantaneously upon impact with the substrate, forming a porous matrix of flattened metal particles, interspersed with inclusions of metal oxide and unmelted metal. This porosity is sealed by normal ageing, through formation of salts of the component metals (oxides, hydroxides, carbonates, etc.), or as stated above by sealing, and or, painting.
The correct surface preparation is essential, involving cleaning followed by grit blasting to preferably white metal, Sa3 (BS EN ISO 8501-1), with a surface profile of at least 75µm. This provides the chemically and physically active surface needed for good bonding of the sprayed metal.
Both zinc and aluminium are anodic to steel. Zinc affords greater electrolytic activity than aluminium, providing good galvanic protection to steel exposed in the atmosphere. Breaks in the coating are protected by the galvanic couple, i.e. the zinc corrodes, rather than the structural steel, and its’ corrosion products will self-seal the breaks in the coating.

Aluminium is less active than zinc. Aluminium’s protection of the substrate relies more on a thin oxide passivating film at the surface, however because aluminium is less active than zinc, it cannot protect breaks in the coating.
It has been reported in the literature that the maintenance-free service life of an unprotected aluminium alloy metal spray coating on a typical bridge was predicted to be 25-40 years. Using a sealer and topcoat over the metalised layer is predicted to extend the service life 15-20 years [1]. Also, testing at SINTEF, Norway, in natural seawater, gave free corrosion rates of 2 to 3 microns per year after 11 months of exposure for both Al and Al 5% Mg. This would imply a service life of 60 years for a 200-micron Thermal Sprayed Aluminium Coating [2].

TSA with a single coat of sealer has a track record stretching over several decades, however the disadvantage of this system is the dull, rough appearance of the metal spray. Since the sealer is only applied as a thin coat, it is not possible to enhance the surface appearance, and the corrosion products of the metal spray may become obvious within a short period.

This led to the application of a high-performance paint specification on top of the metal spray in order to enhance its durability, and these so-called duplex systems have been used extensively, based on both TSA and TSZ processes. TSA based systems were specified in the Norwegian Offshore sector, with TSZ used widely on structures such as road bridges.

TSZ systems have performed very well over extended periods (up to 30 years), however TSA duplex systems began to display signs of premature breakdown of the coating system, coupled with extensive degradation of the metal spray coating. Examples of such breakdown included Hutton TLP, Sleipner Raiser Platform, Troll A platform, and at the Troll plant at Kollsnes.

Thermal metal spray coatings have a long service track record in the petrochemical and marine sectors listing advantages such as:

Research was carried out with a series of panel exposures using both gas and arc applied TSA, plus TSZ. These metal sprayed substrates were sealed with a selection of different sealers, and then overcoated with a medium build epoxy MIO/polyurethane specification, and also a high build glass flake epoxy. Panels were immersed in salt water and fresh water, plus natural weathering in both industrial and marine environments.

The results of this series were quite startling. After 24 months saltwater immersion severe degradation of all the paint systems over TSA was observed; with extensive degradation of the underlying metal spray. The large quantities of white aluminium corrosion products effectively blew off the paint system. No differences were observed between any of the different sealers, or between gas or arc applied TSA. All systems applied over TSZ were satisfactory on immersion up to 12 years salt water immersion. All fresh water and atmospherically exposed panels also performed well up to 12 years.

From this testing, it was evident that application of high build coating systems over TSA gives very poor performance when subjected to high chloride salt environments, such as hot salt spray or salt water immersion. The speed of the failure is variable, possibly depending upon the efficiency of the sealer coat, however the end failure effect is the same in all cases. Performance of the same specifications on natural weathering in an industrial C3 environment and fresh water immersion is generally good. Thermally sprayed zinc substrates perform well in all environments.

The definitive document on the theory of degradation of coating systems over TSA was published in 2004 by Torstein Rossland of Statoil [3]. The paper describes a number of system failures in the North Sea oil industry, and suggests the following mechanism for coating failure.

In chloride containing environments, such as in marine atmospheres, chloride ions migrate under the organic coating to maintain the charge balance. Aluminium chloride is then formed.

The recommended treatment for pure aluminium metal spray in a high chloride environment would be to apply a thin sealer coat to fill the porosity in freshly applied TSA in order to prevent corrosion through the pores before the surface can self-seal naturally by weathering, and then protect the substrate from corrosion as intended.
It should be noted that thermally sprayed zinc, or aluminium alloys, do not suffer from the same problems when overcoated by high build coating systems in high chloride environments.