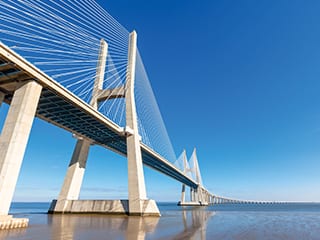 In conjunction with the Austrian Society for Construction Technology (ÖBV), researchers at Graz University of Technology (Austria), are working on a new method of assessing the condition of concrete structures.

The method, high-resolution luminescent analyses of construction materials, or LumAConM, can enable a detailed assessment of the condition of concrete structures on site, as well as in laboratory measurements.

This method should allow the service life, and any problem areas, to be assessed more quickly and precisely than is possible with currently available methods of analysis, according to the university. The researchers also hope that the new method will provide them with a better understanding of the course of the corrosion processes.

The basis for the research is optical-chemical sensor technology, which until now has been primarily used in biotechnology and medical technology. According to Bernhard Müller, chemist at the Institute of Analytical Chemistry and Food Chemistry, they now want to use the tool to assess the condition of concrete infrastructure and thus develop a completely new generation of sensors for the construction industry. Researchers have used this technique to measure the pH of cement-based materials, a measurement that can usually indicate corrosion, .

According to researchers, the measuring system consists of a plastic film with a water-absorbent polymer layer that contains an indicator dye and a reference dye. The wet film is applied to the sample and the pH distribution images are then generated with the aid of a special camera. This technique has reportedly already been able to detect changes in the pH value in various building materials and, with the LumAConM project, the measurement system is planned to be further developed with the goal that be the end of next year it will result in a versatile measurement technology. However, it has also been reported that researchers are also looking into expanding the measuring system to other parameters, such as chloride. 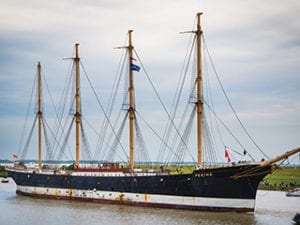 According to Nippon Paint Marine, they have completed the extensive re-coating of the four-masted, steel-hulled, Peking, the 1911-built cargo ship. The 115.5m long, full-rigged barque, one of the legendary Flying-P cargo sailing ships built by Blohm+Voss for the F.Laiesz shipping company, is scheduled to leave Peters Werft GmbH in August after a €32 million, three-year restoration project at their yard on the River Elbe, in Germany.

Commenting on the project, Olaf Riecken, Nippon Paint Marine, said: “This is a highly prestigious project, it was also one of the most challenging, as the original steel structure had to be kept wherever possible. This meant we had to assess the compatibility of our coatings with a steel manufactured more than 100 years ago and which used ferrous alloys that are no longer in common use.”

A further challenge was that since the vessel would not be trading, operating only as a stationary structure, a hull coating with a 25-year lifetime and capable of providing three-year overcoating intervals was required. Also to avoid avoid environmental impact at its future berth, the use of an antifouling paint was not permitted, adding to the project’s complexity.

It was agreed that Nippon Paint Marine’s NEOGUARD 100 GF, a durable, high-solid glass flake epoxy, would be the most suitable coating for the underwater areas of the hull, and this was applied in two-coats to provide a total film thickness 350µm.

According to the company, this system was selected because it provides long-term protection with high impact and abrasion resistance. However, the underwater areas had to be completely primed, protected and coated at an early stage of the restoration project to allow the temporary re-floating of the vessel, stated the company, which meant that, prior to application, the hull’s internal and external areas had to be grit blasted to Sa 2 grade to achieve a clean but porous surface, which was not so straightforward given the lower third of hull was filled with concrete ballast.

Blasting was carried out with the entire ship under canvass to safeguard against any environmental pollution when removing any hazardous materials in the older coatings. Once blasted, Nippon’s Uniprotector, a corrosion-resistant two coat epoxy primer pigmented with aluminium, was applied to improve penetration capability and to extend the maximum overcoating interval by an additional 6 months.

The original rivets and plank overlaps, which were to remain as visible as possible, benefitted from an additional stripe-coat of EPOBARR, a solvent-free, fibre-containing epoxy filler, prior to the application of the NEOGUARD topcoat. Finally, two 150µm coats of E-MARINE A/C were then applied to the Peking’s topsides, decks and rigs/masts, to provide an unlimited maximum overcoating intervals before Nippon’s U-MARINE Finish was applied in a semi-gloss shade.

Niklas Pfaff, Project Manager, Peters Werft GmbH, said that when the vessel arrived on the Elbe it was the most run-down vessel the yard had seen. Their task was to carry out the restoration, but not make her seaworthy again, and to keep the original structure where possible, and to make it visible,

In addition to the extensive paint job, Peters Werft restored the original hull form and was able to retain most of the riveted steel plates using contemporary welding and modern ship repair techniques. All decks, compartments and interiors have been restored, however masts and rigging had to be partly restored and renewed.

When restoration works are finally complete, Peking will berth in the Hansahafen opposite to the new opera house, Elbphilharmonie, to undergo final preparations before the move to her final place where she will operate as the museum ship of the future German Harbour Museum in Hamburg. 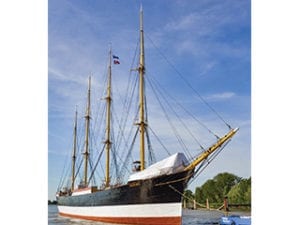 Before and after restoration Photo Credits: Stiftung Hamburg Maritim.