London Branch Joint Meeting with the Society of Chemical Industry 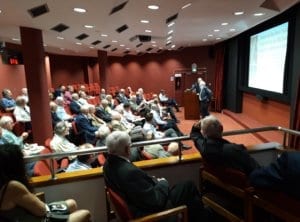 This Season’s 1st Technical Meeting of the London Branch was held on Thursday 26th September. This was a Joint Meeting with the Society of Chemical Industry (SCI) at their Headquarter’s newly refurbished auditorium in Belgravia. By coincidence, this was the location where ICorr S&T was formed and was the base of the Headquarters for a number of years. The late David Deacon also had offices here. The audience of over 70, included Professor Ken Grattan, OBE, FREng, who is the Dean of the Graduate School at City, University of London and who agreed to give the Vote of Thanks. Also present was Gareth Hinds of NPL, President of ICorr and Dr Richard Morrison, President of BeBC. 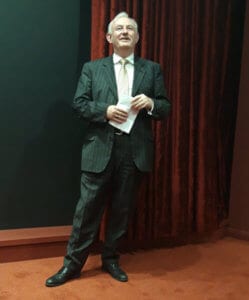 The electric telegraph was first developed by Samuel F. B. Morse, in 1832, who developed Morse Code. Land based cables to use the telegraph soon followed, and within a decade, more than 20,000 miles of telegraph cable criss-crossed the USA and the UK and Europe. Trials of underwater cable were undertaken by Samuel Morse across New York Harbour in 1842 and Charles Wheatstone across Swansea Bay in 1844. In 1851 a cable crossed the English Channel.

The problems of laying a cable across the Atlantic were a greater challenge, not just the technical and logistical problems, but financing such a great undertaking. The first attempt in 1857 failed when the cable broke, and could not be recovered. New finance was arranged and in Aug 1858 they succeeded, when the first transatlantic telegraph message was transmitted. Unfortunately the cable failed after only three weeks, it is thought due to breakdown of the cable insulation when voltages of a few thousand volts were used to try and speed up transmission speed.

It took another 7 years before new finance was arranged and improved cable designs were developed for the next attempt. For this Brunel’s ship the Great Eastern was acquired, the largest ship in the world, In 1865 it almost succeeded, starting in Valentia Bay , Ireland it reached 600 miles from Newfoundland when the cable again broke. The final success came one year later in August 1866 when the cable finally crossed the Atlantic and permanent telegraph communication established. The 1866 transatlantic cable could transfer 8 words a minute, and initially it cost $100 to send 10 words. $100 translates to about $1,340 today, mainly used by the British and American governments and large corporations.

Development of offshore structure corrosion control in the North Sea, and all around the world, has been on going for decades, in fact close to 50 years and possibly longer in some parts. Given this long experience corrosion engineers rightly considered that all aspects of barrier coatings and cathodic protection were honed to a fine art and as a result one system followed another with great success, in fact Trevor has been involved in many offshore structure designs with responsibility for painting, coating, CP, biocides, inhibitors and other aspects of corrosion control. However the fabrication and installation of new offshore structures in the oil and gas market has declined greatly and that work load has in part been replaced by the upsurge in renewable energy requirements. Specifically the replacement workload has been in offshore wind generation in the form of monopiles, transition pieces and substation fixed jackets. All exposed parts of each structure need to be addressed from a corrosion perspective if the asset is to be protected and the lifetime met.

The presentation walked through the period of time from early offshore structure design and construction for the oil and gas markets to the painful transition to wind energy, including the attendant problems that have occurred along the way and what should have been an easy transformation but often times was not. 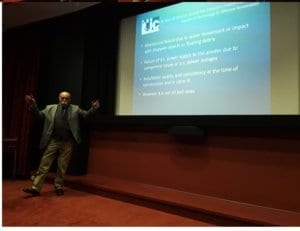 Cathodic protection,using impressed current systems have proved to be the most suitable and effective method of corrosion protection. This is now the preferred system for all off-shore wind farm constructions.