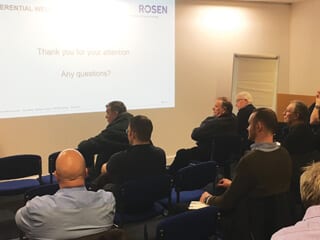 The January meeting was joint with TWI, when Neil Gallon & Michael Young of Rosen presented a talk on Preferential Weld Corrosion (PWC).

This was the first of its type in the North East aimed at creating some synergy between ICorr and TWI. A good crowd of over 20 came to hear the presentation which went into in detail about the differences and complexity of welds in pipelines, and the possibility of galvanic corrosion causing the metal adjacent to the weld being consumed. The heat affected zone (HAZ) can be attacked preferentially to the weld because of changes in morphology and differing galvanic potentials. Potential issues are very difficult to diagnose and therefore a lot of work has been done to understand the effect of adding corrosion inhibitors, for example when they are added to water injection/production pipes to protect the base metal, however this can also cause issues as they do not protect the weld. In these cases the weld can become anodic and preferential weld corrosion can occur.

One very interesting question was asked about the potential ‘double whammy’ of PWC and CUI occurring at the same time. It was confirmed that this could potentially occur if the insulation system was damaged allowing water to enter the system and causing electrolytes to leach from the insulation and gather at the weld.
In summary the evening was great success and this type of joint meeting will be used again.