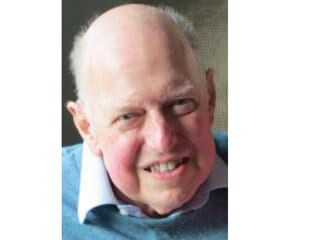 Chris Smith was born in Northampton on 19th May 1944. He was the only child Dora and Aubrey Smith, meeting his father for the first time only at the age of 6 months when the latter was on leave from active service during the war. Chris grew up on Monks Hall Road, Northampton, went to Barry Road Primary School and subsequently attended Northampton (Grammar) School for Boys. The family home was near Northampton Cricket Club, which he attended and from where he gained a life-long love for the game, subsequently shared with his children. At the age of eight, Chris became a Wolf-Cub Scout, moving up to the Scout Troup in 1956. He went on many adventures, including camps in Wales and the Isle of Man, the Easter Initiative Test in London, and hosting Jamboree visitors from the USA and Germany and achieved his Queen’s Scout Award – the top award for young people. In 1962 Chris took out a warrant as an Assistant Scoutmaster and, in the same year, he met his future wife Coral at the Scout and Guide Club – the start of an amazing partnership that lasted 55 years. While family and work commitments initially caused his interest to be interrupted however, after his first son Keith had joined the Cubs, Chris was prompted to re-start his scouting career, which eventually was to involve his whole family.

Chris attended Birmingham University’s School of Metallurgy, graduating in 1965, and decided to stay on to study for his doctorate. At that time there was considerable interest in how to control the properties of steel used for construction of car bodies and during his PhD Chris pioneered the routine use of electron microscopy to understand the microstructural mechanisms involved in the deformation and annealing of sheet steel. For the rest of his career Chris always retained an interest in applying analytical electron microscopy to solve practical problems.

After the completion of his studies at Birmingham Chris and Coral married in 1969 and, after a spell at the Atomic Weapons Research Establishment and the Ministry of Defence Materials Research Policy Unit in London, Chris joined the Corrosion Section of the then Royal Aircraft Establishment (RAE) and the family moved to Hook in Hampshire. When he first joined the RAE his laid back and gentle manner set him aside from the more extrovert members of the section and so at his first Christmas party (in the Price of Wales, Farnborough) his real ale enthusiast colleagues set Chris the “induction” challenge of consuming 5 different beers. Chris steadily worked his way through them all, a pint of each, without any real change in his friendly, laid back disposition. He earned his spurs and the admiration of his colleagues that day!

Chris became Head of the Corrosion Section in 1984 and over the subsequent years he built a number of research relationships with UK Universities to develop alternatives to the toxic cadmium and chromate materials and coatings then used in airframe protection, overseeing pioneering work on zinc-nickel electroplating, magnetron sputtered coatings, anodising and the use of molybdate and rare-earth corrosion inhibitor treatments for aluminium alloys. Chris collaborated extensively with George Thompson and Graham Wood in the Corrosion and Protection Centre at the then University of Manchester Institute of Science and Technology (UMIST, now the University of Manchester) on the surface finishing of aluminium aircraft alloys where his favourite technique, electron microscopy, was used to great effect in elucidating critical mechanisms. Chris was indeed a great friend to UMIST and became an active and valued member of the External Advisory Committee for the MSc programme on Corrosion Control Engineering, lecturing on the corrosion masters programmes there and also at Surrey University. He also had active collaborations with Loughborough University and Cranfield University, and elsewhere, and his valued expertise was called on in a number of occasions as external PhD examiner.

Chris was involved with the corrosion activities of international bodies such as the Group for Aeronautical Research and Technology in Europe (GARTEUR), and the Advisory Group on Aerospace Research and Development (AGARD). This led to collaboration with teams in several major aerospace companies and a regular cycle of aerospace corrosion control conferences and technical visits in Europe and further abroad, cementing Chris’s position in his chosen field. This was achieved while also providing specific corrosion related advice on the RAF’s VC10, Nimrod, Hercules, Tornado and Jaguar aircraft at various times and mentoring the early careers of his new team members, as the RAE successively became part of the Defence Research Agency and eventually the private sector defence technology company QinetiQ. The latter years of Chris’s career saw the Corrosion Section increasingly focussing on projects for the replacement of cadmium and chromate with the participation of companies in the entire aerospace supply chain. During this period Chris attained his personal career target of publishing over 100 peer-reviewed papers and was appointed a company Fellow of both DERA and QinetiQ. He also served for many years as a Referee, Contributor and Member of the Editorial Advisory Board of the Anti-Corrosion Methods and Materials Journal. Even after his well-deserved retirement Chris continued to be active contributing to the 2010 revision of “Shrier’s Corrosion” and starting an Open University degree in Mathematics which, unfortunately, he was only 30 credits from completing when he died.

Chris was a very kind and gentle person, and this shone throughout his life: in his family, in his hobbies and interests and in his work. He was a great listener, never refused a request and was always ready to help. These characteristics made him a fantastic mentor, particularly for early career researchers, colleagues and especially the PhD students whom he funded and helped guide through their studies. Amongst the corrosion community he was widely known and immensely well-respected. He is survived by his wife Coral, children, Keith, Neil, Helen and seven grandchildren.   He will be greatly missed.

© Stuart Lyon (Corrosion and Protection Centre, School of Materials, University of Manchester),  Robin Oakley (Team Leader for Metals, Corrosion and NDE, QinetiQ) and acknowledging contributions from Bill Cox, Vic MacLoughlin and Coral SmitChris was a very kind and gentle person, which made him a fantastic mentor, particularly for early career researchers, colleagues and especially the PhD students whom he funded and helped guide through their studies. Amongst the corrosion community he was widely known and immensely well-respected. He will be greatly missed. Chris is survived by his wife Coral, children, Keith, Neil, Helen and seven grandchildren. A longer version of this obituary can be found on the website.