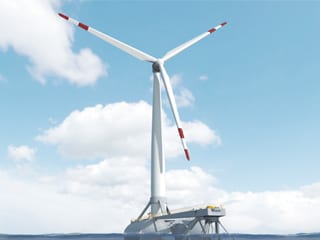 RWE Renewables and Saitec Offshore Technologies have teamed up to develop a floating platform for offshore wind turbines.

The two companies plan to test new approaches to the affordable installation and operation of wind farms in deep waters. They have launched a joint pilot project called ‘DemoSATH’ that will lead to testing of a floating platform next year off Spain’s Basque Coast.

The SATH technology is based on a twin hull made of modular prefabricated concrete elements that are subsequently braced. The objective of the project is to collect data and gain real-life knowledge from the construction, operation and maintenance of the unit. The pilot project will last 3.5 years: 18 months for the planning and construction, followed by a two-year operating phase.

The structure and the 2MW wind turbine will be assembled in the port of Bilbao. The base of the structure will be approximately 30m wide and 64m long. The platform including the turbine will be towed to its anchorage point in a test field two miles off the coast, where the sea is about 85m deep. Hybrid mooring lines, composed by chains and fibre, anchored to the seabed will hold the floating body in position. The plant is expected to go into operation in the third quarter of 2021. The electricity generated during the project will be fed into the Spanish power grid.

DemoSATH will be Saitec Offshore’s second project in open waters, as the deployment of a scaled 1:6 model off the coast of Santander is scheduled for April this year.