Repainting of Øresund Bridge gets under way 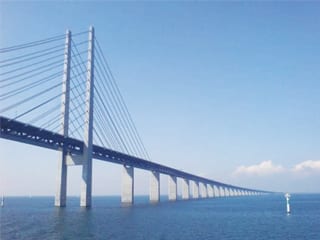 Nearly 20 years after its opening, a multi-year project to repaint the Øresund Bridge, the combined rail and motorway bridge, which links Denmark and Sweden, has begun.

The repainting of this 300,000m2 steel structure has been described as the largest investment in the bridge since its inauguration.

According to the press release, the top layer of the five-layer painting system will wear out within the next 10 years, thus new top coats have to be applied to be able to maintain the lower coats, which protect the steel from corrosion. To achieve the application of two new layers of paint, the bridge consortium ordered special custom-built platforms, allowing painters to be safe from passing trains and traffic. The initial phase of the painting operation will be carried out by Muehlhan Denmark.