Survey Drones can now go beyond line of sight 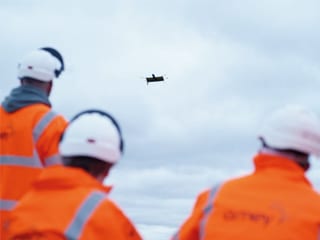 The use of drones for aerial inspection and survey is increasing, and their usefulness is set to increase with a demonstration by AmeyVTOL of a drone inspection carried out beyond the visual line of sight.

AmeyVTOL is a joint venture between Amey and aerial robotics specialist VTOL Technologies. AmeyVTOL’s drone, known as The Flying Wing, has a flight range of up to 100 km, and sensors that enable it to capture and send data in real time.

During the demonstration, The Flying Wing autonomously surveyed an area out of the sight of the pilot up to 2km away.

According to Amey, the success of the trial opens up the use of drones for inspections of long linear infrastructure such as roads, railways and overhead power lines, saving time and cost, and improving the safety of staff.  The demonstration project was part of a government-sponsored Rail First of a Kind (FOAK) programme promoted by Innovate UK through the Small Business Research Initiative.

It is reported that AmeyVTOL will now be offering this survey capability to other infrastructure owners and operators.