The Paul MacIntyre award 2018, has been awarded to Dr John Broomfield for his services to the corrosion protection industry by the Institute of Corrosion President Sarah Vasey at the Corrosion Engineering Division working day in Warrington. 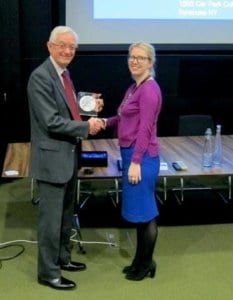 The award is presented to a senior corrosion engineer, who, as well as being a leading practitioner in their field, has advanced European collaboration and International standards development (in keeping with Paul’s areas of interest).

The criteria for the recipient of this award are as follows:

Dr Paul McIntyre graduated from the University of Newcastle upon Tyne with a 1st class honours degree. He spent his early career in the steel industry. In 1978 he moved to the Central Electricity Research Laboratories in Leatherhead as group leader of EAC studying stress corrosion, localised corrosion and corrosion fatigue in conventional and nuclear power plants. Later he was involved in asset management and remaining life assessment of components including development of remedial methodologies such as RAM (reliability, availability and maintainability) and RCM (reliability centred maintenance). From 1996 until 2006 he was Editor or the British Corrosion Journal (which became CEST). For six years from about 2004 until 2010 he worked as consultant in the electrochemistry and corrosion group at NPL. His scientific insight and depth of engineering experience was critical to successful analysis of a wide range of failure investigations including fracture of wind turbine bolts, corrosion pitting in a desalination plant as well as providing informed corrosion control guidance to industry. Paul wrote almost 60 published papers and over 200 internal reports. In addition to his career in industry Paul had almost thirty years of participation in corrosion standardisation within BSI and ISO committees. These included being past chair of ISO/NFE 8 Corrosion of metals and alloys, and UK representative on the equivalent ISO committee TC 156 and within that being secretary of WG2 Stress Corrosion Cracking and member of WG 7 Accelerated Corrosion Tests. He made an immense contribution as Scientific Secretary of the EFC. He was also on the Council of the Institute of Corrosion from the early 2000s specializing in standards work and pan European activities. In 2003 Paul was awarded the T B Marsden prize of IOM3 for his considerable achievements in promoting standards, education and publishing in corrosion and materials. The chair of ISO TC 156 stated at the award citation “Paul has provided more input into the development of ISO standards in the corrosion field than any other individual”. Paul was invariably polite and accommodating to everybody. But he had core of steel and dry sense of humour. In 2010 he was diagnosed with secondary liver cancer and very sadly passed away in 2012