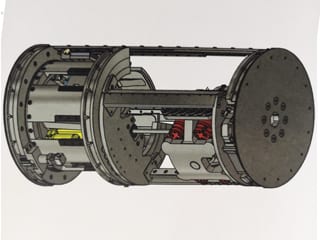 Forth Engineering, a Cumbrian engineering company is leading the development of a welding robot to repair pipelines from the inside.  It is being described as a ‘world-first pipeline technology that will revolutionise performance and safety in industries around the world’.

The FSWBot is a friction stir welding robotic crawler for internal repair and refurbishment of pipelines, which is being developed by a consortium led by Forth Engineering in Cumbria with UK government backing. The consortium includes TWI, J4IC, Innvotek and London South Bank University. The development project is due to be completed by end of January 2021.

According to the company, the FSWBot is envisaged to be a five-segment or six-segment PIG type vehicle which will be inserted at the production end of an oil pipeline and will travel with the oil flow to a pre-designated spot to perform a repair. One segment will carry the FSW machine and a steel patch dispenser, with the other segments carrying the navigation, control system, communications, non-destructive testing (NDT) and power storage/generation payloads.

On entering the pipe segment containing the pre-identified defects, the robot will stop, then slowly advance until the FSW system is in place over the defect. It will then lock itself in place and confirm that it is correctly located to perform the repair.

An onboard turbine in a duct within the robot will harvest energy from the oil flow within the pipe to augment any power cells carried on the system, with the duct providing through flow in the pipe.

Once energised, the FSW unit will deploy a milling tool to cut away the corroded area and prepare a pocket in the pipe wall into which a steel patch will be dispensed.

The FSW unit will then weld this patch in place and deploy the milling system again to ensure that the patch is flush with the pipe wall and will not initiate turbulent flow, nor impede the passage of subsequent cleaning or inspection PIGs.

FSWBot will then deploy NDT packages to inspect the weld for quality assurance before unclamping and moving downstream to repeat the process on any further defects.