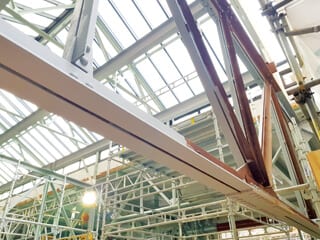 ICATS is moving rapidly towards its 15th anniversary in March next year and continues to grow exponentially with such prestigious organisation supporting the programme as; Highways England, Network Rail, Transport for London, London Boroughs, Sellafield, Workplace Solutions and Devonport Dockyard to name a few

The business is packed with great stories where companies have been able to demonstrate improved workmanship and cost saving through the ICATS training programme;

K&M Group (London) have used the ICATS training programme as the basis to build the skills necessary to develop their industrial coatings division. They have been incredibly successful in winning work in this sector around London including; Battersea Power Station and Southwark Council.  They will be holding seminars in the New Year at Arsenal football club and inviting potential customers from the London area. Customers will be able to see the benefits of the ICATS programme and have the opportunity to talk to people who have benefited from the scheme.

Survivex (Aberdeen) have installed some of the best training equipment in the country and have started the task of training applicators in the north-east of Scotland.  They have won support from the Altrad Group and Bilfinger who they bring into the ICATS family.  They will also be holding seminars in the New Year at their facilities in Aberdeen, and inviting customers from both the offshore and onshore industries.

Paintel (Plymouth) continue to drive the excellent training programme, Work Place Solutions, at Babcock, and to the applicator community across the South West.  Rob Hurley has become a Senior Specialist Trainer allowing Kevin Harold more time to develop the ICATS programme even further; new modules will be introduced in the New Year which will assist specialist activity in our industry.

Livingstone Surface Treatments (Cumbria) continues to offer the ICATS programme with  the Managers Course held at Sellafield in October being a great success and ICorr are planning a joint evening with the Materials Society of Cumbria in March next year. There will be further ICATS training delivered by Livingston Surface Treatments, for the engineering community in Cumbria throughout 2020.

The Managers Course programme gives the specification writer and planning engineer a knowledge of protective coatings, standards, specifications and the complexity of their application. In addition to Sellafield the course has also be given at Babcocks.

There are two new Approved Training Centres in Aberdeen and London and additional companies to join the growing group in Birmingham and Southampton are being sought.

SMART Card – the work is virtually complete on the new SMART card which will be launched in the New Year. This complies with the CSCS requirement for the Partner Card scheme of which ICATS is proud to be a member.

The first apprenticeship programme, run by DN Colleges and driven by Jack Tighe Ltd, will be coming to a conclusion in mid2020 and the second apprenticeship cohort has recently started. It’s a great credit to JTL who have driven the whole programme and somewhat surprising other major applicators in the UK haven’t taken up the programme. Martin Hillyard at JTL said that it offers young people a new opportunity, improves skills and capabilities, and starts to redress the industry issue of an aging workforce who are retiring with those skills. Kevin Harold and John Whittaker have worked tirelessly to develop these ICATS apprenticeship modules.

We are pleased to announce that Skills Training UK will be adding the Industrial Coating Applicator training programme to its already successful NDT apprenticeship which is a perfect fit with the BINDT and IMechE in Sheffield.

K&M McLoughlin has credited the ICATS training programme – which has trained 66% of its workforce – for not only the successful application of the high solids surface tolerant epoxy to girders in the turbine hall at the old Battersea Power Station, but also the smooth running of the project and the quality of the service.  A few of the employees were doing the course whilst working on the application at Battersea, which allowed them to learn practical skills on site to back up the theory being taught.

The London-based company has spent six months working in collaboration with tradesmen and scaffolders on Phase 2 of the £9bn project at the instantly recognisable landmark that will be transformed into housing, shops, offices, and over 19 acres of public space.  The scale of this phase of the project at the Grade-II listed building, was something that had to be closely managed by K&M McLoughlin on site with a vast network of birdcage scaffolding needed to accommodate the variety of trades.

Many of the team that worked on the Battersea project had been working on rail projects for London Underground, but now they have an industrial coatings qualification thanks to the in-house training programme, which is great for everyone.

According to Ross McLoughlan, head of the Industrial & Rail specialist coating division, “We invest in them. We pay the course for them, we pay them their wages while they’re here and it’s a mutually beneficial initiative for both the team and the company.”  The benefits aren’t limited to the emerging pool of talented applicators though, as the training programme has also opened doors for K&M McLoughlin, which will be using ICATS trained staff in the application of a sophisticated two-pack epoxy fire protection system at the new Google building.

“It increases our diversity as a company,” continued Ross. “Whereas some clients might outsource the job and not be able to complete the work themselves, we can offer it. We’re a £10 million company and one million of that is focused on protective coatings, which has helped reinforce the reputation of K&M McLoughlin, and we’ll be looking to grow that department by bringing as many people as we can through the ICATS training programme.”