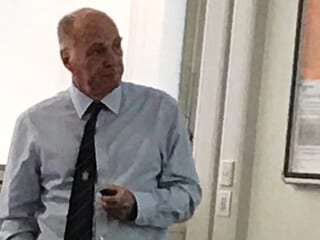 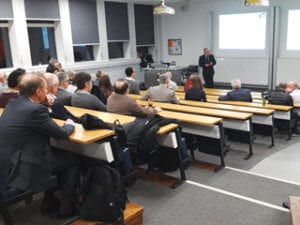 he branch AGM was held in March, which was followed by the “President’s talk”. The chairman, Paul Brook, reviewed the activities of the branch over the past year and noted that we had had excellent presentations. The Treasurer, Jim Glynn, announced that again our finances were in good shape, and that surplus monies will be returned to head office.  Paul then asked if any members wanted to join the committee, and confirmed that existing members were happy to serve for another year.   Paul also informed the meeting that the branch is close to completing a venue move from Imperial College, Kensington to the IMechE offices in Bird Cage Walk, Westminster.  This should be a great home for London branch future technical talks, which will restart following the summer recess in October, on the second Thursday of the month as usual. More details will be available on Institute web site in due course.

Gareth Hinds then presented his views on  the future of the Institute, and discussed ways we could adapt to changes, including environmental challenges, the rise of digital communications, and how to encourage more young engineers to join the Institute, and how to support them. This generated a lot of discussion and interesting suggestions.

The April meeting, the last of this season, was joint with The Welding Institute, and was given by Alan Denney of TWI, on the subject of “High tensile steel bolts and nuts: hydrogen embrittlement and failure in corrosive environments.’

Alan started by talking about the failure of threaded components used as shear connectors for earthquake resistance on the San Francisco Oakland Bay Bridge, which has been well documented in the technical press in the USA. These galvanised rods (in ASTM A354 grade BD steel) were pre-installed in 2008 in the supporting piers to the bridge superstructure which are above the water level. The superstructure was assembled and in 2013 the rod connectors were pre-tensioned hydraulically to 70% of UTS. A number of these suffered brittle failure, the published cause of which was that the rods failed due to hydrogen embrittlement arising from stress corrosion cracking.

Alan then proceeded to explain the conditions required for stress corrosion cracking, namely a combination of a susceptible material, a source of the hydrogen,  and tensile strength above a threshold value. He explained that the hydrogen could be either from internal sources in manufacture, or from an external source. The potential sources in manufacturing include hydrogen retained from steelmaking or hydrogen resulting from pickling of the components prior to coating. The external source would result from corrosion, the hydrogen being generated by the cathodic reaction. He explained that failures can occur in nuts as well as the bolts or threaded rods, and that in galvanized components
the zinc acts as a barrier to the outward diffusion of any trapped hydrogen.

Failures of structural bolts have a long history. Alan mentioned that his first encounter with bolts failing from hydrogen embrittlement was in the 1970s on a television transmission tower, with failures occurring in V grade and Y grade bolts on cold nights; the bolts being found on the ground in the morning, and his most recent experience of a failure was a few weeks before this talk. Apart from in transmission towers, such failures have also occurred in the recent past on prestigious building structures, and in offshore wind turbine towers. Recent occurrences known to Alan have been in large diameter high tensile bolts, generally in bolt grades 10.9 and above. He explained that there was a relationship with hardness of the fasteners (both bolt and nut), and covered recommendations in standards such as those published by DNV-GL for offshore wind turbine structures, which limit the highest strength grade to 10.9. He discussed the typical crack morphologies associated with hydrogen embrittlement and how the fracture surface could be ‘read’.

Alan then discussed some of the metallurgical aspects in bolt and nut materials and the recommendations and findings of work carried out by the Deutscher Schraubenverband (DSV) in relation to the desirable elements in the composition, and their proposed limits on chemical composition. He presented some findings from DSV on the failure thresholds in 10.9 bolts under ASTM F1624 test conditions with different coating types and then finished by summarising the findings:

n There is a risk of stress corrosion cracking with the use of fasteners with a UTS > 1000 N/mm2 in a corrosive or marine environment.

n The much-quoted guideline of 380 Hv as the threshold for stress corrosion cracking is not conservative, notably when there is a risk of external corrosion, even during temporary conditions.

n Controls which will improve their performance in marginal situations can be put in place for the bolt materials, their heat treatment and metallurgical controls, their coating systems and application, and their quality control and testing requirements .

However the main means of avoidance of SCC is to control the environment.

There was a lively question and answer session, with interesting contributions from the audience and the meeting was closed with a vote of thanks and a presentation to
the speaker.