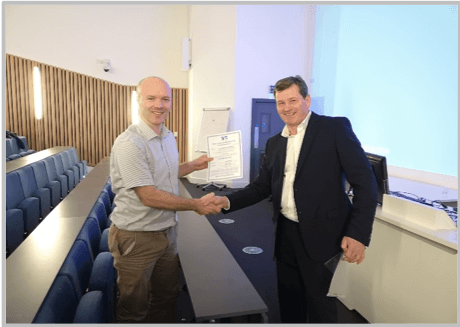 The 3rd Technical Meeting of the 2019/2020 Aberdeen Branch Session, was held on 29 October. This was a double header event with Dr Gareth Hinds, the current ICorr President speaking about “Growing the Institute Membership, and the ICorr Awards”, and later on, Matt Streets of RAWWATER: presenting “An understanding of Reservoir Souring and Mitigation”.

Dr Gareth Hinds started his presentation by posing the question: How can the Institute of Corrosion adapt to thrive in a rapidly changing world?  He reminisced that he had first attended an Aberdeen Branch meeting 13 years ago and complimented the branch for being one of the strongest and most active of the regional branches. He went on to say that since then he has learned a lot about what its members can give to the Institute and what they can expect to get from it in return.

He described the history of the Institute and the benefits of Membership, and stated his belief that the more one puts in, the more one will get out of being a member.

Gareth reminded the audience of the history from when ICorr started as the British Association of Corrosion Engineers in 1959 and the many name changes and location changes that it went through up to present day, when the Institute recently purchased its own headquarters building in Northampton.

The President went on to explain the different types of ICorr Membership touching on the plans to change individual membership to “Affiliate” and other planned changes. He also touched on the challenge to get student members to stay, and by empowering younger members, for example to take part in the young engineers programme which has as a prize a free trip to the NACE conference in the USA, and free ICorr and NACE memberships.

Gareth continued by highlighting key Membership benefits which he stated were networking, career development, visibility and financial rewards. He also gave the audience an update on the situation with the Engineering Council caused by the sudden failure of the Society of Environmental Engineers (SEE) in that the Institute hopes to combine with the Society of Operational Engineers (SOE) to continue to award Chartership (CEng) status through the Engineering Council.

It is expected that a new agreement will proceed next year with SOE and ICorr head office will be in touch with all ICorr chartered engineers affected to confirm this.

He described the brand refresh which will be taking place at the start of next year 2020 when the ICorr website and all paperwork etc. will be revised to make the image of the Institute more modern.  Pictures of rust and corrosion will largely be replaced by pictures of gleaming new infrastructure (of natural metallic colours / alloys) and similar modern metallic hardware. Gareth told how the Institute had undergone digital modernisation and members can now pay their subscription online on the website.

The visiting President said that the Institute of Corrosion was once again looking to influence governing bodies as they had in the 70s, when they had been very influential in getting CAPCIS in Manchester and the National Physical laboratory setup.

Gareth’s most comprehensive presentation was both enlightening and uplifting, showing his clear vision for the future of the Institute of Corrosion under his leadership.

In the second (technical) presentation of the evening Matt Streets of RAWWATER discussed to the large audience how, as all oilfield reservoirs have different souring propensities, operators must view all injector/producer (I/P) pairs as unique in regard to H2S gas production, as well as control and mitigation strategies.

The following and very detailed RAWWATER presentation by Matt Streets described how a predictive oilfield souring model can be used to help forecast if, when, and to what extent, an oilfield will sour.

He explained how the model describes the cooling of an oilfield due to water-flooding and the subsequent growth of sulphate-reducing microorganisms, resulting in sulphide production at the topsides facilities.

Outputs from the model can be used to inform and influence key operational decisions and have provided huge cost savings for operators through cost-effective material selection and chemical dosing.

At the end of his presentation Matt answered questions from the Audience on topics such as where the model input data came from, how critical seawater breakthrough was to the modelling, how many core samples were required to confirm that they had not been contaminated, the viability of injecting alternative food stock to the reservoir and about re-educating Oil and Gas operational personnel after several recent ownership changes.

At the close of the meeting, the Aberdeen branch chairman, presented both of the speakers with a Certificate of Appreciation from ICorr Aberdeen Branch. 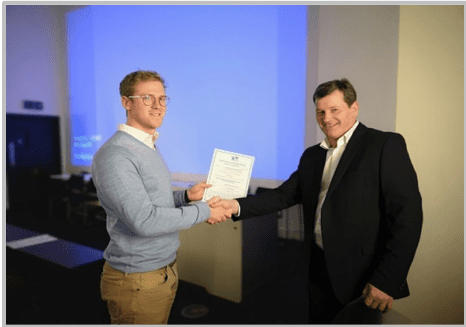 Activities continued afterwards at the Norwood Hall Hotel nearby, with further fruitful discussions on Aberdeen Branch Development, improved HQ integration and many other issues.

The Branch is very grateful to Gareth for making the long journey north and for his great enthusiasm and interest in our Branch Activities.

Full details of all future branch events can be found on the diary page of Corrosion Management Magazine and on the ICorr Website, or on this link:

Copies of the majority of past branch presentations

Branch photo gallery for these events 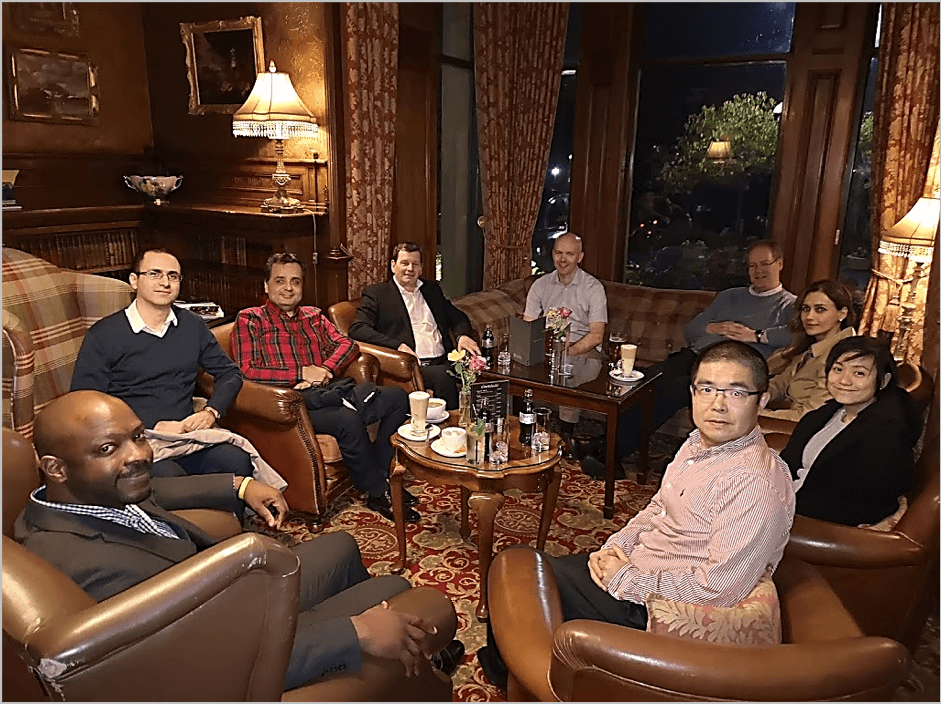