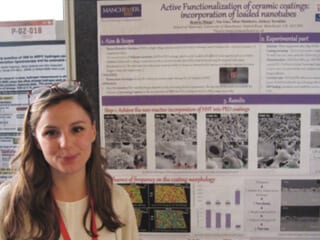 This major conference, which this year was combined with the 20th International Corrosion Congress and the Process Safety Congress,  was held from 3rd  – 7th September 2017 in Prague, Czech Republic. It attracted 1200 participants from 62 countries, with the largest number coming from France, second was China, third was Germany, fourth United Kingdom and fifth the Czech Republic. There was a large exhibition, featuring a total of 49 exhibitors and this was opened on the Monday evening with a reception.  In accordance with the traditional format, the conference was divided into parallel sessions, 43 in total, running concurrently. These included sessions organised by the various EFC working parties (details of these are available at http://efcweb.org/wp.html), various Joint Sessions, Technical Forums and Workshops, and six Process Safety sessions. The conference was opened by Tomáš Prošek (Czech Association of Corrosion Engineers and chief organiser) and Damien Féron (President of the European Federation of Corrosion). The European Corrosion Medal was then awarded to Mário G. S. Ferreira (University of Aveiro, Portugal) who gave  a talk on ‘Immobilisation of active molecules in nano-structured materials for multifunctional coatings’ in which he argued that although additives can confer important functionalities (corrosion inhibition, anti-fouling, sensing, adhesion), the direct mixing of additives into coating formulations can have serious drawbacks.

The Marcel Pourbaix Award was presented to Christofer Leygraf (KTH Royal Institute of Technology, Sweden), who delivered a plenary talk on ‘Atmospheric corrosion: current challenges in an evolving research field’. The development of simplified but practically relevant model systems, along with international exposure tests and laboratory experiments aided by analytical and technical advancements has greatly increased our understanding of atmospheric corrosion. The speaker sought to highlight present and future challenges. 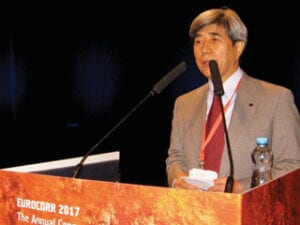 On the Wednesday morning the EUROCORR Young Scientist Grant award, which provides financial support to young corrosion practitioners to visit and interact with groups working in other countries, was presented to Hongchang Qian, who will work with Dr Yaiza Gonzalez-Garcia (Delft University of Technology, Netherlands); Anissa Célina Bouali, who will work with Dr Alexander Lutz (Vrije Universiteit Brussel, Belgium); and Berk Ozdirik, who will work with Dr Patrik Schmutz (EMPA, Swizerland). Details of this award can be found at http://efcweb.org/EUROCORR+Young+Scientist+Grant.html.

Prizes for the best posters were also presented, with first prize going to Alexander Lutz (Vrije Universiteit Brussel, Belgium) for ‘Local electrochemical study of ternary Zn–Fe–Mo alloy coatings on carbon steel’. The second prize going to Beatriz Mingo (The University of Manchester, U.K.) for ‘Active Functionalisation of ceramic coatings: incorporation of loaded nanotubes’, The  plenary lecture on the Wednesday  was ‘Continuum and atomic scale simulation of stress corrosion cracking and causality’ by Tetsuo Shoji (Tohoku University, Japan). The speaker described the application of stress and strain analysis by theoretical elastic-plastic stress field analysis and FEM, quasi-continuum (FEM and molecular dynamics) and Quantum Chemical Molecular Dynamics to examine the role of stress and strain in SCC in relation to the chemical and physical properties of materials.

The conference Gala Dinner took place on the Wednesday evening at the riverside Zofin Palace, with an extensive buffet of Czech specialities and drinks, presented in the numerous rooms of this impressive building including an upstairs and gallery. The multiple levels made it possible for a choice of two parallel entertainments, the spacious upstairs ballroom being entertained by the Havelka Sisters and their Orchestra with traditional light jazz and swing music, while the downstairs dance room was rocked by the Beatles Revival (Brouci Band) with their repertoire of Beatles hits.

On Thursday, the plenary lecture was given by John R. Scully (University of Virginia, USA) on ‘Needs, gaps and opportunities for better design of corrosion resistant materials’.  The speaker cited a recent National Academy study suggesting that an ideal corrosion-resistant alloy might well be formulated in the future using integrated computational materials design. This presents the challenge of connecting the attribute-defined features of an alloy, with the subsequent properties, by applying relevant scientific principles.  Significant scientific needs, gaps and opportunities must be met in order to improve this theory-based design approach

Next year the EUROCORR congress will be held from 9th to 13th September at the ICE Kraków congress centre, Poland.

The above is an edited version of a longer report that will appear in the first issue of 2018 of the journal Corrosion Engineering Science and Technology. Thanks are due to Ruth Bingham for supplying the two photographs.

Beatriz Mingo
(The University of  Manchester).

The Branch in association with Loughborough Surface Analysis Ltd (LSA) and Midlands Surface Analysis Ltd (MSA), is holding a one-day workshop on surface analysis and depth profiling techniques, and how they can be used to help with a variety of challenges relating to corrosion.  The workshop will draw upon a wealth of real-world experience in using these techniques, and will be held on 24 January 2018, at Aston University, Birmingham.  It will consist of a series of seminars given by experts in the field on the individual techniques (including case studies), together with an optional practical demonstrations on some of the techniques in the laboratories of MSA Ltd.  Opportunities will also be provided to discuss participants’ specific cases either in an open forum or in private with the analysts present.

The agenda for the day and further details can be found on the Institute website. 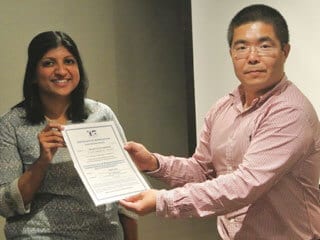 The opening events of the 2017-2018 session kicked things off to a very good start with an average attendance of 50.

Firstly, September was a joint event with TWI, and there was a very interesting presentation by Susan Jacob of CAN (Offshore) Ltd, entitled “An Investigation into the Wrinkling Phenomenon on Corrosion Resistant Alloy (CRA) Pipelines and Its Impact on Pipeline Integrity”.  This focussed on issues arising with both the laying and subsequent inspection of thin CRA internally clad pipelines.  CRA’s have been increasingly deployed for new and replacement Pipe Lay Projects however they can be problematic and great care must be taken at the installation stage to prevent wrinkling, as Susan highlighted.   This topic will be subject of a more detailed technical paper in Corrosion Management in January/February 2018. This upcoming paper will aim to respond in more detail to the many questions raised by attendees, who clearly enjoyed the evening, including, the definitive evidence as to whether pipe lay procedures adequately did, in this instance, address the potential risk of wrinkling and whether (10 years on) more modern methods of fitting CRA Liners are any more resistant to this CRA wrinkling phenomenon; the evidence as to whether applying internal pressure can eliminate the wrinkling risk and as to whether cleaning tools irreparably damage the CRA Liner, or whether perhaps increased Anti-Scale CI and Reduced Cleaning Frequency is a safer approach? The article will also consider the ability of the Intelligent Pigging (IP) Tool to detect thinning changes in a 3mm thick CRA Liner and / or small perforations or tears of this liner, and whether there is a likelihood of ongoing corrosion in the CRA/carrier annulus in cases where CRA disbondment has occurred.

Composite repair has been extensively used in the last 10 years to extend the operating lives of process systems, particularly but not exclusively, for piping systems, which would otherwise have required costly interventions and loss of production and outages that may ultimately have caused the facilities to cease production altogether!

The talks considered some key questions that once again generated much interest from the gathered audience.   What came across was the increasing industry confidence that these composite repairs can provide fully engineered long-term repair solutions, providing additional structural strength (subject to necessary quality controls, such as a high standard of surface preparation), to provide to Energy operators a guaranteed service life.

The ‘new world’ of composites was wonderfully illustrated with many practical day-to-day examples such as the new A380 Airliner and the “New Bus for London”, that contain a very high percentage of composites. For example, the four key structural composite parts which make up the rear end of the new bus support the weight of the engine, the passengers on the platform, the staircase and the upper deck. Using these composite materials has resulted in the saving of several hundred kilograms from the structural weight of the bus compared to traditional materials, and of course very significant fuel savings.

Information about all forthcoming Aberdeen branch activities can be found on the diary page of the magazine and on the Institute website, alternatively a calendar of local events of interest to corrosion professionals in the Aberdeen area, and the opportunity to sign up to the Branch mailing list is available at https://sites.google.com/site/icorrabz/home. Aberdeen Branch have also established their new Media Centre on LinkedIn, which can be found at https://www.linkedin.com/in/aberdeen-icorr/recent-activity/

ICorr Aberdeen Chair presents a Certificate of Appreciation to Speaker Susan Jacob of CAN (Offshore) Ltd.

The CEOCOR 2018 CONGRESS is being organised by the Institute of Corrosion, which is the British representative to CEOCOR, from May 15th until May 18th 2018, at Stratford on Avon.

This is a great opportunity to present your most recent research and experiences on corrosion and protection of pipes and pipeline systems in the field of drinking water, waste water, gas and oil.  Titles and abstracts (approx. 10 lines in WORD format) should be submitted to the Presidents of Commission 1 and Commission 2, with a copy to the Secretariat of CEOCOR, before January 15, 2018 at the latest.

Any questions should be addressed to the Presidents of Commissions or to the Secretariat.

Authors will receive notification of abstract acceptance before January 22, 2018, and full texts of the presentations must be sent to the Presidents of Commission 1 and Commission 2, again copied to the Secretariat of CEOCOR before April 1, 2018 at the latest.  Author guidelines can be found on the CEOCOR 2018 website, www.ceocor2018.com

Registrations are now being taken by ICorr for attendance at CEOCOR 2018 and discounted rooms are available for booking at the Crowne Plaza.  Details can be found on the CEOCOR website.