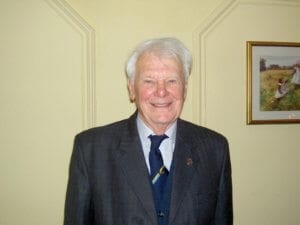 Bill was born on 1st August 1922, to Walter and Georgina Holden.  He was an only child.  He lived initially on Wigan Road in Westhoughton, then on Manchester Road, before the family moved to St John’s Road in Chew Moor in 1929.  Bill went to St Thomas’ School in Lostock, until he took the entrance exams for Bolton School in 1932.  He started there in September 1933, aged 11.  He left Bolton School in 1940, when he was 18, and went to work at the Chemical Defence Research Establishment in St Helens, synthesising mustard gas and other poisonous gases.

He worked there until 1941, when he decided to volunteer to join the RAF.  He was accepted, having astonished the RAF assessor by returning perfect 100% marks in all the entrance exams (The first time that this had ever been achieved), with the remark along the lines of…“Tha’s made of some pretty good stuff, lad !”

Bill went off to train, firstly in London, then Babbacombe, Devon, and then off to Canada and America. He got his ‘wings’ on 16th May 1942.  Bill spent most of his time in the RAF in, and around Africa, including Sierra Leone, Cairo and Aden, and then in the Middle East.  Later on, Bill was also stationed in Normandy, Ghent in Belgium, and Hamburg.

Bill married Annie on 12th May, 1945.  He was demobbed in June 1946, and started as a student at Manchester University in 1946.  He studied there until 1949, when he graduated and began his career at W & J Leigh & Co, rising to the position of Chief Chemist – a position that he held with distinction until he took early retirement in 1984 to look after Annie, who was not in the best of health at the time.  As with everything, he did a good job – they were married for 67 years by the time she passed in July 2012.

Bill (Often affectionately referred to as ‘BDH’ in general conversation amongst Leigh’s staff, but always a respectful ‘Mr Holden’ in his presence) was renowned for his encyclopaedic knowledge of anything connected with paint technology, and his approachability and willingness to share this knowledge with any of his staff, from laboratory managers right down to the most junior technician.

Bill was an avid reader of all the technical journals and had an incredible photographic retention of the information, right down to the date and issue number of any given paper…  Forget Google – Mr Holden was way ahead of the game in terms of a reference source for any information that you needed!  He was an active supporter of the Institute of Corrosion and for two years was Chairman of the North-West Branch. In addition, he was a 50-year life-member of the Oil & Colour Chemists Association.

Bill also read and absorbed every single report produced by his R&D team, and would frequently summon a nervous young lab technician into his office to discuss a project, which usually concluded with the dreaded question…”So what do you think we should do next ?”… After listening intently to the junior’s fumbling attempt at an answer for Plan ‘B’, he would typically reply…”Yes, very good, try that; and while you’re at it you might also want to try… “ (Plans ‘C’, ‘D’ and ‘E’). Of course, Bill’s ideas were always the ones which worked best, but he would never discourage his staff from trying anything (within reason!) and to learn from their experimental failures as well as successes.

Outside of work Bill enjoyed many things including gardening, tennis, badminton, painting, photography, yoga, family history, music, dancing, walking and travel.  He enjoyed doing many of those things with his family, including his two daughters, son-in-law, three grandchildren and five great grandchildren.

Even in retirement, right up until the last few years – having suffered a stroke in 2013 – Bill would visit the laboratory for a guided tour prior to the annual Christmas party held for retired Leigh’s staff – Joe Nugent, Harold Twyford and Roy Lindley amongst them, who also were staunch ICorr supporters; and he always showed a keen interest and understanding of whatever he was shown, although the news that the lab samples were no longer made by ball mill did not go down at all well.

With typical Bill Holden thoughtfulness and thoroughness, he’d left a recorded message that was played at his funeral, and very typically it was supportive of everyone else rather than concern for his own situation.

Bill Holden will be fondly remembered as a great leader, mentor and most importantly an absolute gentleman.