A CED Working day and Symposium on Corrosion Engineering and Concrete 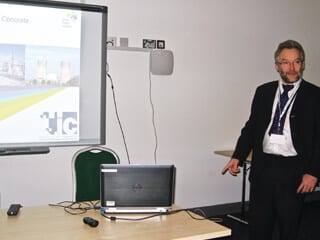 A CED Working day and Symposium on Corrosion Engineering and Concrete was held on Thursday, 27 April at IMechE Engineering Training Centre, Sheffield. The meeting was sponsored by the Institute of Concrete Technology.  Some sixty delegates were welcomed by the Chair of CED, Nick Smart (Amec Foster Wheeler), who introduced the Division for the benefit of those who were not members and also outlined the programme for the day. This was followed by an ‘Introduction to the Institute of Concrete Technology’, given by the President, Raman Mangabhai.

Chris Atkins (Mott MacDonald) addressed, ‘The trouble with concrete’.  He outlined the origin of the problems with concrete caused by shrinkage and the means of overcoming its poor compressive strength by inserting reinforcement.  Settlement cracking was capable of giving rise to 2 mm wide cracks, which could penetrate right up to the rebar. Other aspects of steel corrosion in concrete were then discussed including the electrochemical mechanisms of corrosion, forms of chemical attack that can occur during use, repairing chloride-induced corrosion, cathodic protection, and decisions to repair (covered by BS EN 1504), with BS EN ISO 12696 providing further guidance on conformity.

Next, David Simmons (BAM Nuttall) outlined, ‘The use of coatings to manage corrosion in concrete’. “Getting it right first time” is a phrase that is often used in construction. This applies equally to reinforced concrete if it is to be durable and provide the service life as specified by the end-user. The problem with reinforced concrete is that while engineers fully appreciate the importance of including the reinforcing steel, not much consideration is given to the low-cost, easy-to-use, void filling material that surrounds it. In effect, the concrete cover should be regarded as a protective coating, and must be properly specified, batched and used, which can only be achieved by proper exchange of information between the designer, user, and producer of the concrete.

‘Impressed current cathodic prevention of steel in concrete’ was the subject of the lecture by Hugue Bois (SAPIEM SA, France). Theoretically, steel in concrete should not experience corrosion. The concrete pH is around 13 and this alkaline environment stabilises the iron oxide or hydroxide film, thereby passivating the embedded steel. The concrete layer also presents a low permeability barrier vs. external aggressive species, e.g. chloride ions or carbon dioxide. However, in some cases, ingress of these species reduces the pH to 8 or 9, thus impairing the passive film. Examples of field experience were given, including reinforced concrete steel piles, the use of Mn/MnO2 reference electrodes, and the importance of identifying the various at-risk zones, for example of a sea wall, viz. immersed wall, buried wall, atmospheric, splash and tidal zones.

The technical talks from this meeting are available (in pdf form) on the members area of the ICorr website.

After the presentations, the delegates were afforded the opportunity of visiting the concrete and corrosion laboratories at Sheffield Hallam University, and to participate in CED Working Group Meetings. The concrete and CP, nuclear and coatings work groups all had successful sessions.