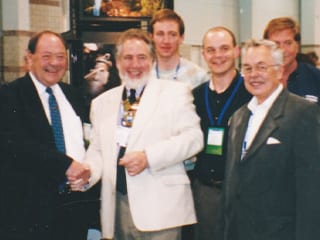 It is with sadness that we report the news that the Chairman of Winn & Coales International Ltd, David Winn OBE, passed away on the 21st of September 2020.

David Winn, the grandson of founder Paul Winn, joined the company in 1965. He had a long and distinguished career at Winn & Coales, serving as Deputy Chairman from 1968-1991 and Managing Director from 1988-1995. When Frank Coales passed away in 1991, he became Chairman of the company and held this position for 29 years until his passing in September 2020.

David Winn had many wonderful and notable qualities, one that shone through was his charitable nature. He was awarded an OBE on the 12th of May, 1995 by His Royal Highness The Prince of Wales for being a Governor of West Norwood College for 24 years and for successful fund raising for Eastbourne College.

David was an ardent supporter of the Institute of Corrosion and especially London Branch, whose meetings and events he regularly attended. In particular, his Company provided considerable encouragement and financial sponsorship to the Institute, especially when Tony Logan, one of his Managers, was the Chair of London Branch.