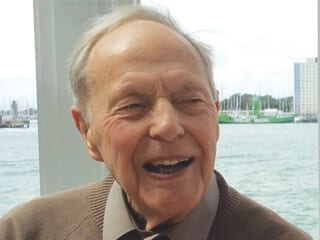 Derek Holmes, a longstanding enthusiastic supporter and officer of the Institute and its predecessors, died recently.  Derek was born in Bedford and went via scholarships and exhibitions to Bedford School (37-45) and Wadham College (45-51), Oxford, where he intended to read chemistry, but because of the exigencies of the war and the requirements of the state bursary, he was awarded he had to read physics at Oxford or metallurgy or glass technology at Sheffield, so he became a physicist. After graduating he researched with H. M. Powell, FRS, on the crystal structure of clathrate compounds, but he showed eventually that the material whose structure he determined was a simple condensation compound, 4-isopropylidene aminophenol, and not a clathrate.

After leaving Oxford in 1951, Derek joined the late C. W. Bunn, FRS, at the ICI Plastics Division, where he completed the structure analysis of Nylon 6, polycaproamide, (German and Russian nylon) and made considerable progress with the structure of polyisobutene, and with several of the exciting new isotactic polymers being developed from the work of Professors Ziegler in Germany and Natta in Italy.  While at Welwyn his interests broadened considerably with his marriage to Cynthia in 1953 and the arrival of his three children, and at work where he became involved in other physical analytical methods such as electron and optical microscopy and non-destructive testing.  In 1960 he was recruited by the late Dr. Forrest, FRS, at Central Electricity Research Laboratories, Leatherhead, to lead a Non-Destructive Testing Section in the Physics Division, but due to a major expansion and reorganisation of CERL before he joined found himself as Head of the Structural Studies Section in the Materials Division.

Soon after joining CERL, Derek was fascinated to hear a paper by Potter and Mann at the 1st International Corrosion Congress on the growth of two-layer magnetite scales on high-pressure steam generating tubes and he spent a significant proportion of the rest of his professional career studying the growth, properties and breakdown of oxide films in a wide range of technological environments.  In the Materials Division, Derek was given the opportunity to surround himself with a group of brilliant young men who rapidly adopted his critical quantitative approach to corrosion and oxidation.  These young colleagues very soon made significant scientific contributions in high temperature oxidation and in the study of oxide properties, and Derek’s large group was renamed the Oxides and Corrosion Section.  Many of them played major roles in the development and work of the Institute and its predecessor societies, and of the European Corrosion Federation, notably both David Mortimer and Mike Manning serving terms as Hon. Secretary of the Institute, and the excellent Dr. Barry Meadowcroft who provided consistent support during his tenure as Group Head.  Other colleagues in Derek’s section went on to become Laboratory Managers of the Marchwood Engineering Laboratories and of CERL, while Derek himself served terms as President of the Corrosion and Protection Association, and Chairman of the National Council of Corrosion Societies. He worked with Henry Cole and Bowler-Reid to form the then Institute of Corrosion Science and Technology from its constituent societies, and later served on the Council of the Institute and as Hon. Secretary, and for many years as Chairman, Secretary and Editor of the Institute’s Publications Committee. His 23 years at CERL were professionally most satisfying, with work in his section on materials for many diverse applications and problems, including MHD electrodes, zinc air battery electrodes, sodium, helium and CO2 cooled reactor materials, and conventional generation materials, which led to a wide range of publications.  Many of these were presented initially at the annual Corrosion Science Symposia, which Derek and his colleagues supported enthusiastically, and others were given at the International Congresses and at the Gordon Research Conferences.   Highlights in his career at CERL included a visit to Russia as an industrial member of a DTI Team of UK Corrosion Specialists lead by Professor Parkins (the only time he ever had diplomatic immunity!), and in 1979/80 a period of secondment to the Electric Power Research Institute in California working with John Stringer and Bob Jaffe.  His time there and various other journeys in the USA and elsewhere gave him a taste for foreign travel, and this, together with the projected privatisation of the CEGB and the associated inevitable reduction in research, led him to seek early retirement in 1983.  He intended to spend his additional spare time on his much-loved pursuits of gardening, windsurfing, travel and supporting his family.  But such was not to be!

As soon as Derek and his wife returned from their retirement holiday, he was asked by John Bernie at the National Corrosion Service at NPL, to spend three years on a part-time basis setting up and managing co-operative research projects to minimise the cost of corrosion to UK industry.  Nine years and four major projects later (totalling £2M in all) he retired from his active work at NCS.  Simultaneously with his work at NPL the Institute asked Derek to set up and lead a Publications Committee to increase the Institute’s output, reputation and profit from their high quality technical and scientific publications.  He finally retired as Secretary and Books Editor from this committee in 2000, having edited and nurtured the publication of a number of valuable books including, in particular, ‘Dewpoint Corrosion’ in 1985, and the ‘Corrosion Handbook’ in 1999.  In the 80s, Derek and his wife, Cynthia, were often to be seen on the Institute’s stand at the UK Corrosion Conferences selling both the Institute’s publications and the benefits of Institute Membership.

Derek always felt himself to be wonderfully fortunate in his research career, both in the exciting discoveries being made in so many of his different areas and, especially, in the many brilliant colleagues and friends he had in the Institute and in the wider corrosion field.  He was a man of many parts and although always dedicated to his work in science and technology he loved his rugby, windsurfing and swimming.  At CERL he was sprint champion and record holder at his age group for a number of years and was the shove-ha’penny champion as well as swimming competitively.  He always maintained a strong interest in education, particularly for those who were less fortunate than himself, and served as a governor of local primary and secondary schools for 23 years.  He also served as an occasional PhD Examiner for Newcastle University and Imperial College, as a first degree Examiner at Sunderland Polytechnic (now University) for 4 years, and on the Standards Inspection Group for the Council of National Academic Awards.

Derek is survived by Cynthia, who kindly assisted in the preparation of this summary of Derek’s life and achievements, and who notified the Institute of a generous bequest that he was keen should be made to the Institute on his behalf.