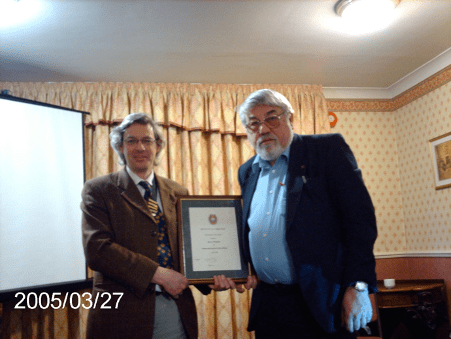 It is with great regret that we report the death of another of the great and good of ICorr. Barry died on 5th May aged 83, a victim of Covid 19. He was born on 27th December 1936 in Lower Broughton Salford, and went to Broughton Secondary Modern School, leaving at the age of 15 to work in a paint factory. He went to night school to study Chemistry and Paint Technology at Newton Heath Tech, where he met his life-long friend Ray Stott. Both of them joined ICorr and attended all the Monday evening lectures and symposia where Barry could be guaranteed to ask searching questions. He served on the North-west branch committee as Chairman and later Treasurer. He also served on Council for many years. Despite his lack of opportunity to go on to higher education he became a Fellow of OCCA, a Fellow of ICorr and a Chartered Scientist, he was considered by his peers to be a very clever man and the most knowledgeable person in the paint industry in the field of corrosion protection. He did his National Service as a medic in the RAF, stationed in London, during which time he continued his night school studies. Barry worked for England Hughes Bell for many years and later with Corroless International – whenever the brand was sold Barry was always part of the deal and moved through several companies including Unitor and Mason’s Paints. He spent many years travelling abroad mainly in the Middle East, Malaysia and Singapore on trouble shooting and technical support. Finally when semi-retired he worked for Alocit Systems; it was when he was travelling to their UK offices in Norfolk that his career came to an abrupt end, a speeding BMW smashed into the back of a queue of traffic on the A1 catapulting Barry’s car into the central barrier, although he appeared to be unhurt at the time his health rapidly deteriorated, a minor fall at home, and a check-up at A&E resulted in a broken hip when he fell off the trolley whilst waiting for attention, this was followed a few months later by acute neurological problems which left him with a speech impediment and balance problems. He remained on North West branch committee until his late seventies when his deteriorating health forced him to move into sheltered accommodation in Holmfirth, closer to his younger daughter, Lisa. He spent his final days in a care home in Barnsley where he contracted the virus.

Barry was married to Marie for 44 years and would often quote how many days hours and minutes. They spent their married life living in Bolton and had two daughters Diane and Lisa, and four grandchildren. His own lack of opportunity resulted in him encouraging both his daughters to attend university. In his younger years he enjoyed motorcycling, he played golf and was a keen walker, and a long-term member of the Crown Walking Club. He was a lifelong Manchester City supporter, proudly wearing his scarf even through the doldrum years and was elated with the rapid rise to the top in recent years. He took a keen interest in all types of public transport, but particularly buses, he could tell you the numbers, routes and timetables of all the buses, not just locally, but in the many of the places he had visited over the years. He was particularly excited when on holiday in Malta he discovered that all the service buses were ex UK of various vintages, some of which I am sure he knew personally. It is understood that this fascination started at an early when at the age of two or three he would disappear only to be discovered at the end of the street watching trams. After he retired, he loved to go on coach holidays, he would turn up with his suitcase and five carrier bags of things which he couldn’t fit in much to the dismay of the driver. This expanded to seven on the return trip as he insisted on carrying his dirty washing home in black bin liners. Barry took a scientific interest in food, extoling the virtues of chicken soup and making his own home-made soups. When in late middle age he was diagnosed with Type 2 diabetes knowing he had to cut his sugar intake he reasoned that scones had less sugar than cake and cream had none, so he could have scones with jam! and cream, and because they had less sugar than cake he could have two!

He will be sadly missed, not just for his idiosyncrasies and eccentricities, but for his vast knowledge and experience. Even to the end he was talking about organising a joint OCCA / ICorr symposium with the theme the A-Z of Coatings. Barry’s funeral was held on 26th May, it is so unfortunate that we couldn’t give him the send-off he deserved.

Barry receiving the Presidents Plaque from the then President, Stuart Lyons.