The Mary-Rose and the Dynamic Duo – Joint Meeting of the Institute of Corrosion, London Branch with the SCI London Group

The second annual Joint Meeting of the Institute of Corrosion, London Branch with the SCI London Group was recently held at their prestigious headquarters in Belgravia Square. This ultra-modern auditorium made for a most comfortable setting and was enjoyed by an attendance of over 60. In the previous two days, eight health-related apologies had been received with many more from younger members on holidays with their children, as this was half-term week.

The Evening Chairman, John T O’Shea, a Past President of ICorr, began the evening procedures by thanking Dr Fred Parrett, currently Hon. Treasurer of the SCI London Section, for all his work in helping to organise this event. This was an excellent venue and was just around the corner from the Star Pub.

John T O’Shea, a Past President of ICorr, open the meeting

There were two separate presentations – “A Fighting Ship” and “Fighting Corrosion”.

The first presentation “A Fighting Ship” was based around the Mary-Rose project at Portsmouth. This was given by Professor Eleanor Schofield, Head of Conservation and Collections Care at the Mary Rose Trust. Eleanor graduated from Imperial College, where she also received her PhD in Material Science. She has recently received an Honorary Chair at the University of Kent, at Canterbury.

Whilst we are all familiar with the story of the recovery of the Mary Rose in 1982, Professor Schofield began her talk by correcting the too often quoted story that she sank in 1545 on her maiden voyage. In fact she was built in 1510 and served for 34 years as the flagship of Henry VIII’s navy in many battles particularly in wars against France. 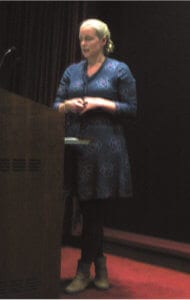 Following the lifting of the ship out of the seabed mud, to prevent further deterioration once exposed to air, the timber hull was treated over many years by spraying with water and polyethylene glycol. Perhaps less well known is the work in restoring and maintaining over 19,000 artefacts that had also been recovered. A significant part of the collection were the 1200 plus iron cannonballs. These have been exposed to sea-water since the ship sank, and the chlorine in sea-water which is very damaging to iron when later exposed to air. This corrosion can eat away at the metal and weakening its structure. It was vital that ways were found of preserving the cannonballs. It was recognised that while the cannons were made to last and be used many times, the cannonballs were only needed for a one-off use. Thus they were greatly inferior in their quality and standards of manufacture.

Initially researchers attempted to remove chlorine from the cannonballs, by soaking in water with and without chemical treatment. Chlorine reduction by heating in an atmosphere of hydrogen was also attempted. Unfortunately, this did not successfully prevent disintegration when they were later put on display. To better understand this, Professor Schofield, established a research project with UCL Archaeology and the UK Diamond Light Source, to understand what was going on inside the cannonballs.

Diamond Light Source in Didcot is the UK’s national synchrotron. It works like a giant microscope, harnessing the power of electrons to produce penetrating bright light that scientists can use to study anything from fossils, to jet engines, to viruses and vaccines.

Diamond’s bright light X-rays combined with absorption spectroscopy, and fluorescence mapping made it possible to visualise the differences in the corrosion profiles. These could be traced to the treatments applied in the 35 years since the cannon balls were recovered with the Mary Rose. The results of the bright X-rays have revealed detailed maps of the elements involved in the corrosive process, an unprecedented insight into conservation on a molecular scale. This crucial information will help protect this and other cultural heritage artefacts for many decades to come.

The second presentation, “Fighting Corrosion” was given by Jim Glynn, a previous Chairman of London Branch and currently the Hon Treasurer. He also runs his own business, Beanny, which is a Coating Distribution Company. 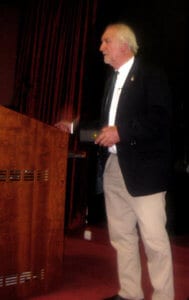 In his introduction to this presentation, John reminded the audience that the Annual Award of the U R Evans Prize included the presentation of a full-size Sheffield Steel sword, while the H G Cole Award was a mounted poniard (a large dagger). These weapons represent the continued fight against corrosion.

Jim concentrated on the Dynamic Duo, starting with a suitable protective coating as the primary source of defence against corrosion. This should then be supported, where appropriate by a cathodic protection system to prevent any corrosion occurring at holidays or in areas of coating damage. This applies to in-ground and sub-sea structures.

It is often commonly conceived that rusting is a simple, chemical oxidation reaction – but it is not. Aqueous corrosion is however, a complex, multi-stage step process which includes electron transfer at the molecular level. Thus these Electro-Chemical operations during corrosion can be influenced by the external application of electrical potentials. Under the right circumstances, corrosion can be stopped by applying the appropriate level of negative potential using a DC current supply.

Jim presented many examples where the correct conditions of a good coating and a suitable working cathodic potential were present. However, he also described many examples where this was unsuccessful. These included a pipeline coating that had totally disbonded and broken away from the pipeline. This was due to a higher potential than required, which generated hydrogen gas on the surface of the pipeline, causing the damage.

He also described Thermally Sprayed Aluminium (TSA) applications, which are excellent protective coatings when properly applied. The aluminium content can also act as its own in-built cathodic protection anode. However, in the wrong environment, the aluminium can be quickly used up.

Jim expanded his presentation to compare the recent Case Studies of retro-fitting remote anode beds to two similar North Sea rigs. These rigs had exceeded their design life, but it was decided that the sub-sea structure could be further protected using cathodic protection. One had been fully coated with coal tar epoxy, while the legs on the other had been left bare, but with a built-in corrosion factor that should exceed its expected life. The survey confirmed that both could be successfully protected using the methods adopted in the much deeper waters of the Gulf of Mexico.

The coated structure required 1,000 Amps, while the bare steel legs needed around 7,500 Amps to produce the correct comprehensive negative potentials. The location of the anode sea-beds were also calculated. These high DC currents were produced by banks of adjustable transformer rectifiers (TRs) connected to an AC mains electrical source.

Jim also interspersed a number of quiz questions, asking the audience to identify some notable Dynamic Duos in life, film and comic books with several bottles of wine as prizes! This was well received and considered a fun way to conclude the presentations.

The Vote of Thanks was given by Dr Parrett and he presented the speakers with ICorr Engraved Cross pens, as a memento of the evening.