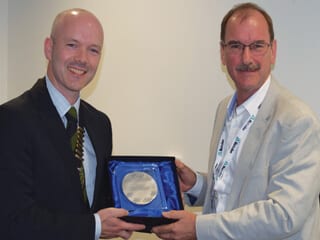 A report on the CED annual working day meeting held during ELECTROCHEM 19, The University of Strathclyde, Glasgow on 28 August 2019, by Dr David Nuttall.

However, to start the day, Gareth Hinds, ICorr President, presented the U R Evans Award to Prof Tetsu Shoji, University of Science and Technology, Beijing, China, who then gave his U R Evans award plenary lecture (see CSD report below). There were then three further short presentations by Blue Scientific, Hiden Analytical and EPSCR.

The conference then split into three streams. The corrosion stream was given over to CED talks from industrialists on the theme of corrosion monitoring in industry. The first of these was, ‘Electrochemical corrosion monitoring (ECM) in the nuclear industry’ given by Clive Harrison (Wood, Warrington). Although not commonly employed in the UK nuclear power industry, ECM can provide a valuable role in understanding the nature and causes of corrosion. Corrosion is usually discovered during inspections at station outages or component failure while operating. However, there have been many instances in which ECM has elucidated complex corrosion issues. The technique has proved especially useful for localised corrosion such as pit propagation or stress corrosion cracking (SCC). The presentation demonstrated the value of ECM with reference to the author’s plant experience over the past 30 years.
Sarah Leeds (DC Voltage Gradient Technology & Supply Ltd, Wigan) gave a presentation on, ‘Monitoring corrosion protection of pipelines utilising the main survey techniques’. Pictures of the sorts of coating defects identified were shown together with graphical data derived from DCVG, CIPS and soil resistivity techniques. A novel remote control DCVG technique was presented whereby a surveyor can control from land, using a remote control device, to identify coating faults on subsea sections of pipeline, with the meter on an unmanned boat also recording all DCVG electrical measurements and GPS coordinates. The electromagnetic form of the soil resistivity technique enables a total profile of the whole right of way of the pipeline under survey but can only be performed when not pulsing the CP system on and off, and not carried out on top of the pipeline but to one side of the right of way. Finally, in conjunction with Prof Douglas Mills (Northampton University), a non-destructive device, ‘ProCoMeter’, based on electrochemical noise, has been developed which is ideal for site use or continuous monitoring of corrosion behaviour.

Hunter Thomson (Scaled Solutions Ltd, Livingston, Scotland) gave a presentation on, ‘Chemical qualification of corrosion inhibitors in the oil and gas industry: Impact of test approaches on performance during laboratory testing’. Laboratory based assessment of corrosion inhibitors is essential prior to field trials, with final qualification relying on close replication to the corroding environment. Research has been carried out into how apparently small changes in test methodology or conditions in these screening tests, can influence the performance of different products. Results illustrated the role of pre-corrosion, chloride concentration as well as the effectiveness of partitioning for different chemicals, on the performance of different products. It was concluded that an understanding and thorough screening programmes are vital to eliminate possible errors and test artefacts.

Finally, in the section of CED talks, Paul Lambert (Mott-MacDonald, Altringham) addressed the subject of, ‘Long-term corrosion monitoring of steel and reinforced concrete’. Major infrastructure is rarely intended to last less than  50 years and more commonly expected to exceed 100 years of usefulness. While many components lend themselves to relatively easy maintenance or replacement, the main structural elements can be difficult to access or even harder to repair or replace. Monitoring the condition of such structures to predict if, and when, some form of intervention is required can therefore be a valuable activity but there are complications. Any monitoring therefore needs to be robust, future-proofed and correctly located to be of benefit. The advantages and disadvantages of half-cell (reference electrode) surveys, acoustic emission, resistivity and linear polarisation measurements were described and discussed.
After these presentations, The Paul McIntyre Award was presented to Dr Steve Paterson (only the third such recipient) by Gareth Hinds. Dr Paterson recalled that he first met Paul at a EUROCORR dinner. With Paul’s encouragement, he then became Chair of WP13 from 2013 to 2017, at which time he retired from Shell UK after thirty-seven years. Whilst at Shell, he investigated the pitting resistance of duplex stainless steels in the splash zone and elucidated their sigma-phase embrittlement due to insufficient cooling rates in which intermetallics have had time to form. He pointed out that the new Standard ISO 17781 DSS calls for impact toughness testing (NORSOK M-650, now superseded by ISO 17782). Presently, he is a mentor for young engineers at Robert Gordon University and Chair of Imperial College Materials Advisory Board.

In the afternoon, the CED held working group meetings. The Coatings Work Group was convened by Douglas Mills (University of Northampton), who was acting Chairman, with nine delegates present. The revised version of “Intumescent coatings” was examined and will be passed on to Keith Wagner (R J Lee Group Inc) so that he can address the in-text queries. Two versions “Abrasive Selection” were also discussed. The version without the Appendix was pronounced sufficient and ready for publication and would be passed on to Nick Smart for publication. The draft of ‘‘Improving the performance of hot-dip galvanizing and duplex coatings’’, was briefly reviewed. No authors have been found to-date for the proposed new document (or book) on, ‘Protective coatings in the aerospace industry’. However, the idea has attracted the interest of Theo Hack and Wolfram Fürbeth (DECHEMA) who will follow this up at EUROCORR 2019. An update was required on, sponsorship of ‘Industrial coatings applicator (ICA) apprenticeships’ discussed at the previous meeting and which will be followed up. No authors have been found to date on ‘High Temperature Coatings’. David Nuttall offered to find someone who may be able to assist. As the Coatings Working Group chairman, has resigned, Keith Wagner was elected as the new chair. Finally, the acting chairman proposed an interim, independent Working Day for the Group in April/May 2020, to be arranged with Nick Smart.
This was followed by the Oil and Gas Group meeting. In the absence of the Chairman, Douglas Mills again stepped in. Douglas discussed the minutes of the last meeting, held on 24 April 2018. There was an outstanding action on Bill Brown (Trac Oil & Gas) to produce a document on duplex materials for the marine environment. This was to be a new document and distinct from the hot-dip galvanizing document that was passed to the coatings group. Hunter Thomson (Scaled Solutions Ltd) was asked to comment on a new draft of, ‘Guidelines for corrosion monitoring and control in seawater injection systems’. Additionally, comments were invited on the following documents: ‘Selection of test methods in laboratory performance evaluation of sacrificial anodes’, ‘Detection, monitoring and hazards of bacteria in oilfield systems’ and ‘Working definitions of solubility, dispersibility and partition for corrosion inhibitor application to oil and gas production systems’. Prafull Sharman (Corrosion Radar, Cambridge) then delivered a presentation on Corrosion Radar Technology for monitoring corrosion under insulation. He expressed his interest in continued involvement with the CED O&G Group and was happy to contribute from the perspective of corrosion monitoring. The date and venue for the next meeting needs to be discussed but will probably be at the stand-alone CED Day in April 2020.

Finally, the Corrosion in Concrete and Nuclear Corrosion Groups held a combined meeting, chaired by Paul Lambert and Nick Smart.