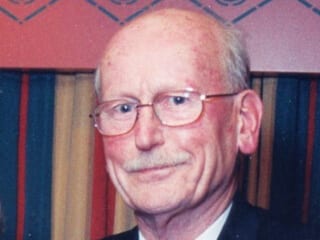 Charles J L Booker (always known by his work colleagues as Charlie) obtained an honours degree in Chemistry from Sir John Cass College and went on to achieve not one, but two PhDs! The first, in 1952 from University of London, was in Physical Chemistry, the second from Christ’s College Cambridge in 1962, was in Metallurgy. These established Charles as one of the brightest thinkers on the subject of corrosion.  After his marriage in 1958 to Marylyn, he undertook a two year academic placement in Canada before returning to the UK to take up a post working under George Butler at the National Physical laboratory. Charles had a progressive view of education and strongly believed in the Polytechnic movement, and would encourage the new generation to consider higher education by giving talks at local schools. In 1965 he returned to City of London Polytechnic to become the Principal Lecturer and Course Director of the MSc in Corrosion Science and Engineering.  It was whilst working there  that Charles would leave his own great legacy. In 1928 and 1953 London had been struck by lethal flooding, resulting in the deaths of hundreds of people. In the 1970s a plan to create a strong flood defence barrier was born and Charles’ department was asked to lead a team of chemical engineers, tasked with ensuring the barrier’s longevity. With a group of committed colleagues he worked hard to ensure the barrier would elude corrosion in the generations to come (the Thames Water Barrier is not due to be de-commissioned until 2070, after close on century of  quietly keeping watch over the city) After his retirement, Charles took a part-time voluntary Directorship at the Institute of Corrosion where he was Honorary Secretary for ten years (1992-2002), and at the conclusion of this period of service, a special award was instituted, (The Henry Cole award –  a Poniard) for outstanding administrative service to the Institute, and Charles was the first recipient.  He also served the European Federation of Corrosion as Honorary Treasurer in the years 2001-2004 where he worked closely with Paul McIntyre.  Charles Booker was a man of distinction, whose loss will be keenly felt by his colleagues, friends and the three children and eight grandchildren that survive him.