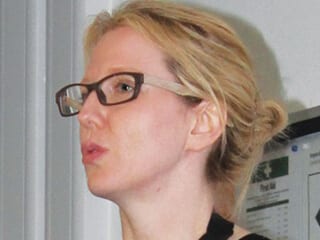 March was the Branch’s AGM, and reports were given by the outgoing chairman, Jim Gynn and the hon treasurer, Mike Allen.  The branch had completed a full and successful meetings programme at their new venue, Imperial College, where they have started to see an increase in attendance with the average up from 30 to 50. The accounts showed a healthy surplus, and funds would be returned to the headquarters account. David Mobbs was elected as the new chairman with George Winning as vice-chair.  Jim also thanked, John O’Shea, Mike Allen, Geoff White, Mash Biaglioli and David Dore, who have all stepped down from the committee, after giving long service to the branch.

After the AGM, Sarah Vasey, the President, gave a presentation about the Institute and its work, which included presentations on an up-date to Corrosion Management, Young ICorr and its aims, and the Route to Chartered Status.

Sarah started with a description of the Institute and how it is made up, including Council, Branches and Divisions, then described the awards, the Quality System, and website. The section on the Council introduced the trustees of the Institute and how they are linked to the larger Council. The members of Council and their roles were then discussed.  The work of the Council involves driving a number of initiatives in which the various Branches have been heavily involved in.  CED was then introduced and the role it plays within the Institute discussed, including a promotion of the upcoming CED day.  It is perhaps not well known that the Institute gives out various awards and the requirements to be a recipient of these were described. Sarah discussed the implementation of the ISO 9001 quality system at Head Office and finally she mentioned the update to the website that is taking place to make it more useful to members.

The editor gave a brief up-date on the new format of Corrosion Management which had been redesign to make it easier to read, and also to include more technical articles and news relevant to the members.   Chris Bridge described the young ICorr initiative, which continues the work started with the Young Engineer program, to promote the Institute to a younger generation. The section is aimed at the 35 and under age group, but not exclusively, and as part of the process there will be events for this group to attend and hopefully branch events can be aimed at the Young ICorr members in the future.  The final subject of the evening was presented by Don Harrop on “The Route to Chartered Status” via the Institute of Corrosion. We are trying to encourage Engineers to get their Chartership through the Institute, and to achieve this, a mentoring program is currently being established with experienced professionals leading them through the process so they can understand the requirements needed to achieve Chartered Status. The program is aimed to go live in September 2017, so potential candidates should put their name forward to, david.mobbs@akzonobel.com.

The evening finished with a lively question and answer session and then the usual London networking session. 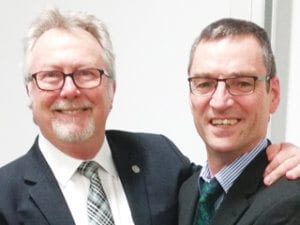 Jim has worked in the Offshore Corrosion business since 1973, and for the last 17 years focussed on Asset Integrity and in particular Life Extension.

He described six current offshore projects which were challenging from a technical, and of course a financial perspective with owner operators who are reluctant to spend money on assets that are getting towards the end of their life. These included using using a novel series of anode belts, and utilising a novel clamp arrangement, which did not require welding, and which could be installed using an ROV, to attach new anodes to a concrete weighted pipe associated with platforms in Malaysia, where diver intervention would also be cost prohibitive.

A fully retractable suspended ICCP anode system was designed for a very old FSO in the Irish Sea, which would not be affected by inclement weather, and the largest ICCP retrofit to a single structure in the North Sea, and the first use of a containerised power supply system because of the lack of deck space. Interestingly there were members in the room who were involved in the original design which was to provide corrosion protection for 25 years, and it actually lasted 40 years.

There were a number of takeaways from this excellent presentation, but one of the major points was that whilst there are Codes of Practice for new build, there are no codes for retro- fit projects.