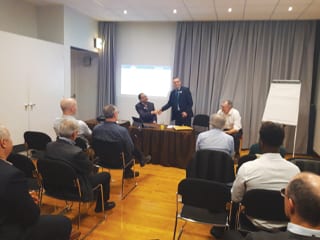 The 2019 branch luncheon proved to be another great success, as the audience was bowled over by an enthralling guest appearance from legendary cricket commentator Henry Blofeld OBE. The unmistakable voice of the Test Match Special, regaled the crowd at the Royal Overseas League in Mayfair with stories from his 45-year career behind the mic, and his two books, which he happily signed for guests after the lunch.

Before the 170 guests settled in the Hall of India and Pakistan for the afternoon, the branch team of diligent raffle sellers had time to mingle and raise an approximate £1,650, which will help fund the future branch series of evening lectures. The contribution from Henry was greatly appreciated, as was the involvement of the event’s sponsors, which this year included Winn and Coles, DuraPol, Corrosion Integrity Management, Correx, and CTS.

The annual event also gave guests the opportunity to reflect on those that the industry lost this year, and in particular the passing of Bill Cox. Tributes to him were led by Institute President Gareth Hinds, who gave a superb account of the excellent work that Bill had done for the Institute during many years of service, which culminated in a rousing applause that Bill would have undoubtedly appreciated.

The first meeting of the branch on Wednesday 8th January had 40 attendees and started with an introduction to the new branding concepts for the Institute, which will be launched in February this year, given by Marc Desmeules, who gave a fascinating insight into the process behind designing a new logo which was the start of the rebranding exercise.

The main technical meeting followed which was a panel discussion on the complexities of internal linings, the selection variables and the link to design standards. The first presentation was from Dr Nasa Miskin from DuraPol who gave a presentation on “Corrosion Prevention in Acid Gas Treating Units”, an extremely difficult and complex environment for any lining system. This was followed by a presentation from Simon Daly of Hempel on “Internal Linings; Selection Variables and Link to Design Standards” which culminated in a discussion on the requirements for the new ISO standard for the internal lining of process vessels.

Both presentations are available to view on the Institute of Corrosion website. It was a successful evening and fantastic to see both the young engineers and branch members in discussion over refreshments afterwards.

The March meeting will be the branch AGM, followed by  the chairman’s talk. Please note the date, Tuesday 10th March.